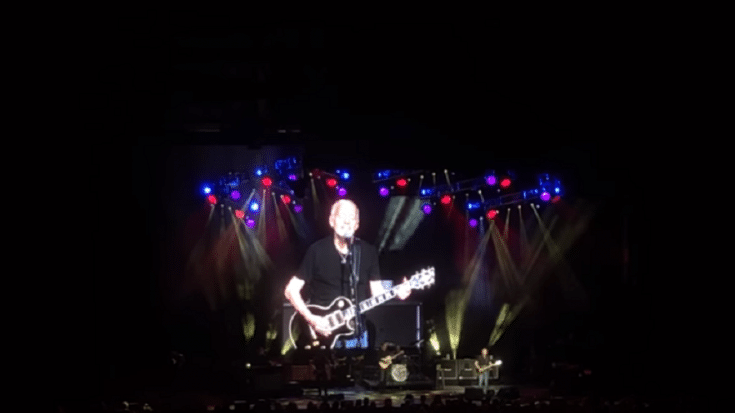 via I broke up MCR/YouTube

Wrapping Up His Final Tour

Peter Frampton finished his Finale: The Farewell Tour at the Concord Pavilion in Concord, California on Saturday. His 16-song set was a mix of deep cuts, fan favorites, and covers. And he wrapped up the show with The Beatles’ 1968 hit While My Guitar Gently Weeps. This isn’t the first time he took on the George Harrison-penned classic. He released his version of the track as his personal tribute to Harrison in his 2003 album Now.

A few months ago, Frampton announced his retirement and revealed that he’s been battling with the progressive muscle disorder Inclusion-Body Myositis for years. He was diagnosed four years ago.

He told Rolling Stone, “In a year’s time, I might not be able to play. Right now, it’s progressing but I’m still at the top of my game. We decided to do a farewell tour now since I don’t want to go out and not be able to play well. If I’m going to do a farewell tour, I want to play good. I want to rock it. I know that this tour, I will be able to do everything I did last year and the year before. That’s the most important thing to me. I want to go out screaming as opposed to, ‘He can’t play any more.’ I’m not going to do that. I’m a perfectionist and I can’t do that.”

He continued, “I want to obviously go out there playing my best at all times until I can’t. That’s why this is the farewell tour. We might be able to do the same thing on a limited basis in Europe in the spring of the following year, but I don’t know that yet.”

Check out the fan-shot footage below.