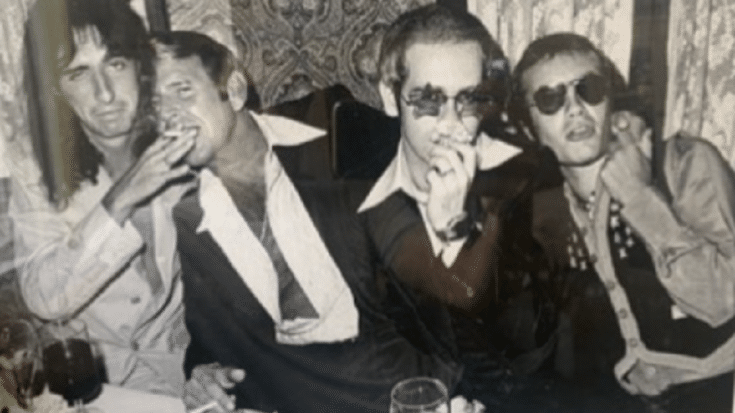 Elton John and Alice Cooper have reunited at songwriter Bernie Taupin’s 71st birthday party and they recreated their iconic photo from exactly fifty years ago.

The two rock legends gathered together in Los Angeles and along with the birthday celebrant, they were joined by Will & Grace actor Eric McCormack to take the place of late comedian Paul Lynde. Lynde passed away in 1982. McCormack posted the photo on his Instagram account and captioned it with, “Bernie Taupin’s 21st Birthday and, last night, his 71st. Fifty years later and I got to be Paul Lynde! Fifteen-year-old me would be losing his mind!”

“Celebrating the milestone birthday of my musical soulmate,” John wrote. “Happy Birthday Brother, I love you.”

Since the 1960s, John and Taupin co-wrote several classic hits like “Tiny Dancer” and “Rocket Man”. Their partnership began while they were both struggling in the music industry. At the time, they were often broke.

“If we’ve weathered the storm now for over 50 years and have been able to maintain this extraordinary bond with each other,” Taupin told Time magazine in 2019, “I don’t think there’s anything on god’s green earth that could separate us now.”