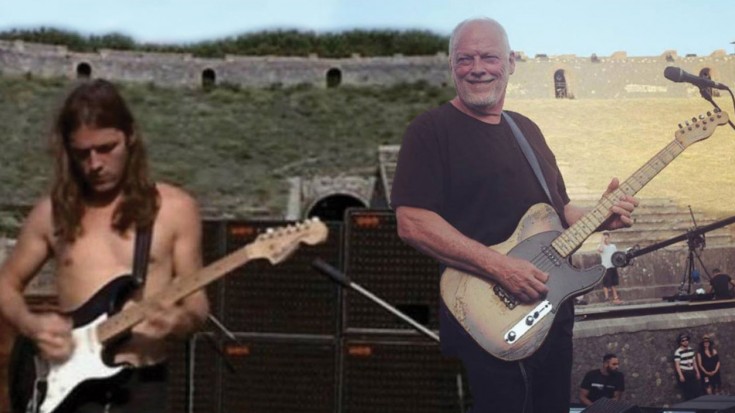 (L) Image via consequenceofsound.net (R) Image via @pollysamson_official on Instagram

This was definitely worth the wait

45 years is all it took for Pink Floyd’s David Gilmour to return to Pompeii, Italy. The singer and guitarist of the British psychedelic rock group returned to amphitheater that he and Pink Floyd had once performed in back in 1971. The performance was filmed and released in 1972 as Pink Floyd: Live at Pompeii, and featured the band playing songs from their album Meddle in the amphitheater, but with no audience. Yesterday, Gilmour took his Rattle That Lock Tour to the once barren Pompeii amphitheater, and put on an unforgettable show. Prior to the show, Gilmour was named an honorary citizen of Pompeii by Mayor Ferdinando Uliano.

The 23 song setlist was very Pink Floyd heavy , and contained some rare performances. Gilmour performed “Great Gig In The Sky” off  The Dark Side of the Moon for the first time in since May 2006, as well as “One of These Days” which was performed during Floyd’s first visit to Pompeii. The full setlist is included below, along with a clip from the 1972 show. Gilmour will play in Pompeii again tonight.