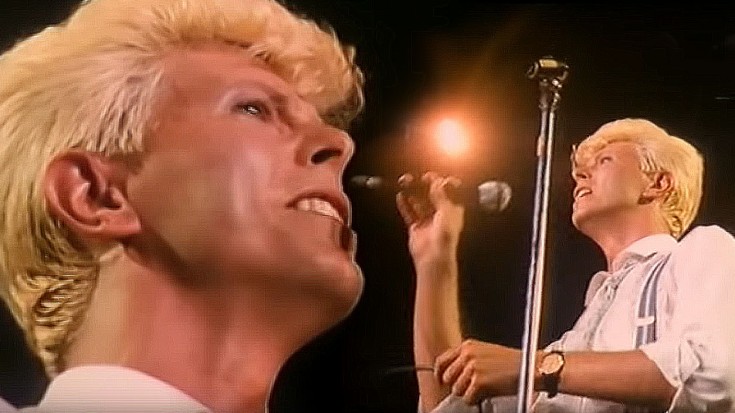 On the final night of David Bowie’s critically acclaimed Serious Moonlight Tour, the life and career of former Beatle John Lennon were celebrated when David brought the evening to an end with “Imagine” – perhaps the biggest hit of John’s solo career and one whose meaning was especially powerful following his senseless death. The two enjoyed a friendship that resulted in a collaboration on Bowie’s hit song “Fame” at Jimi Hendrix’s Electric Lady Studios and it was on the third anniversary of Lennon’s December 8th, 1980 death that we finally heard Bowie speak on both their friendship and his last memory of John, paying tribute to the man he called a friend in the best way he knew how: through music.

Fun Fact: In David Bowie’s “Fame,” Lennon’s voice is heard towards the ending of the song repeating the words: “FAME, FAME, FAME” from a fast track, through a regular track, to a slow track, before Bowie finished the lyrics.

Before launching into a soaring, tear-filled rendition of “Imagine,” David talks about the time John called his brand of rock and roll “Rock music with lipstick on,” and about meeting up with him in China where he snapped a final photograph of John, wearing a Beatles jacket found in a thrift store. “Imagine” begins with a stunning horn introduction, highlighted by backing harmonies and a twinkling piano riff and crescendoes into something that’s not quite John Lennon, yet not quite David Bowie either; the overall experience becoming a performance by Bowie that surely made John Lennon grin, wherever he may be.