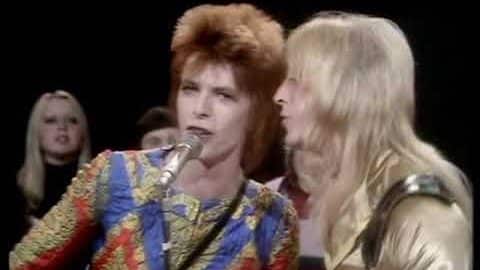 David Bowie‘s team is streaming a new lyric video for classic “Starman,” celebrating its 50th anniversary release as the lead single from the icon’s 1972 fifth studio album The Rise And Fall Of Ziggy Stardust and The Spiders From Mars.

“Starman” was released in the UK on April 28, 1972 and in the US three weeks later on May 20. Following Bowie’s 1969’s “Space Oddity,” it became his second UK Top 10 hit and the first preview to his new alter ego, Ziggy Stardust.

While the album reached No. 5 on the UK album charts and went on to be considered as a groundbreaking and influential project that was added to the National Recording Registry in 2016 by the US Library of Congress. It also featured Bowie’s hit singles “Rock ‘n’ Roll Suicide” and “Suffragette City.”

Meanwhile, the first ever David Bowie film “Moonage Daydream,” have recently premiered at the 75th Cannes Film Festival on May 17 as it is officially authorized by his estate. Directed by Brett Morgan, the film was set to feature unreleased 35mm and 16mm footages from Bowie’s personal archives, including concert footage.

The film also didn’t only explore Bowie’s music and film career, but on different art forms throughout the icon’s life, including dance, painting, sculpture, video and audio collage, screenwriting, acting and live theatre. It will make its streaming premiere on HBO and HBO Max in spring 2023.

Stream the newly released lyric video for “Starman” below.