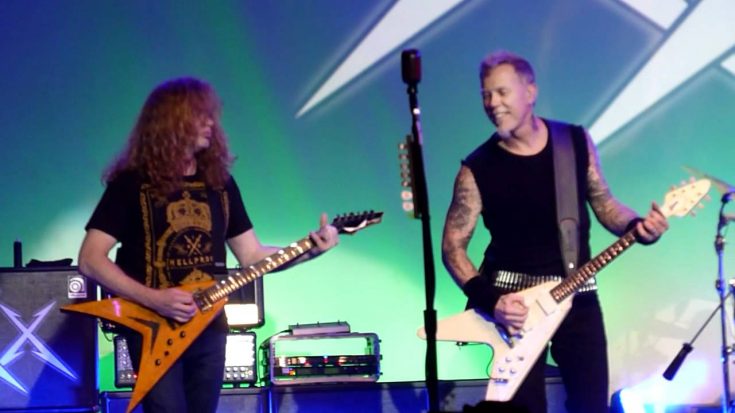 In a recent interview with Andrew Daly of Vinyl Writer Music, Megadeth frontman Dave Mustaine, revealed that he’s been hoping to make music again with the Metallica singer, James Hetfield.

“I have been secretly hoping there’d be a day where James Hetfield and I can write together again.”

The legendary career of the Megadeth leader all started with Metallica. However, too much alcoholism consumed him and affected the way he behaved, which eventually led him to being “kicked out” of the band.

Now, it seems that those issues were already buried in the past and their relationship has improved as they’ve gotten older as per Mustaine. One proof is the tour they’ve attended together as part of the “Big 4” last decade. But it seems that having a collaboration between him and Hetfield is just a hope for now. Mustaine uttered:

“I think the world really does want us to do that, and I think there is a pretty good possibility of it happening down the line. I do think that it’s possible that one day James is going to come around and that he and I are going to be able to do something together again. I guess that’s one of the things that has always kept me pushing forward. I think it’d be good for Megadeth, and it could be great for Metallica too.”

Mustaine also talked about his long service in the music industry and shared his thoughts on why some fans have started calling him as “a perpetual badass.” He explained:

“When you’re not willing to give up, that’s when a lot of people can start to draw strength from you.

“And there have been many of my friends who are tough guys, too, but occasionally, they need somebody they can turn to. These are tough, independent guys, but they’ll say, ‘Dave, I need some advice,’ or, ‘I need someone to give me a hand here.’ And the thing is – and a lot of people get this wrong – there’s nothing wrong with that; I do that all the time.”

“In fact, I do it through prayer all the time, I do it almost daily through my profession, and I do it with some of my closest friends. I think it’s a good thing to give in relationships because it keeps the relationship flowing, and that’s why many of the songs I’ve written have been about relationships.”

Meanwhile, Megadeth are currently on the road alongside Five Finger Death Punch, in support of their newly-released sixteenth studio album, The Sick, The Dying … and the Dead!.