The Killers Bring Out Bruce Springsteen For A Surprise Performance 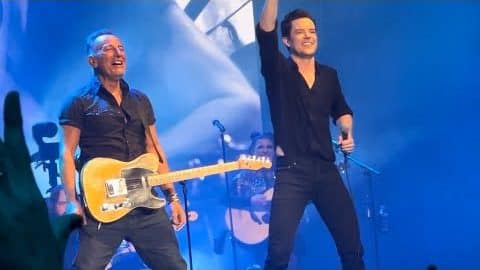 The Killers frontman, Brandon Flowers, asked the crowd, “Everybody gets a little nervous when their boss shows up for work, right?” upon wrapping up their show at the Madison Square Garden last October 1.

The night turned epic when the band brought out The Boss himself, Bruce Springsteen, who joined them for a three-song encore. The two acts sang through their 2021 collaboration song, as well as a couple of ’70s-era gems like “Badlands” and “Born To Run.”

But the surprise did not stop there. Aside from Springsteen, the band also called on stage the saxophonist Jake Clemons to join them. Clemons is the nephew of late E Street Band member Clarence Clemons, who played with Springsteen for 40 years until his passing in 2011.

The Killers are currently on tour and they have been always pulling out special guests along the way. Prior to Springsteen and Clemons, the band opened the night with guitarist Johnny Marr of The Smiths and Lindsey Buckingham of Fleetwood Mac.

The affinity between Springsteen and The Killers is no secret. The Killers have often cited that The Boss has a huge influence on their work, while Springsteen had Flowers on his “Letters To You Radio” back then. The two musical acts also performed onstage together in 2009 at the Pinkpop Festival in the Netherlands.

Meanwhile, Springsteen and The E Street Band are planning to hit the road together in 2023 for a tour across different parts of the world that will kick off in February.

Watch their fan-filmed performances below.