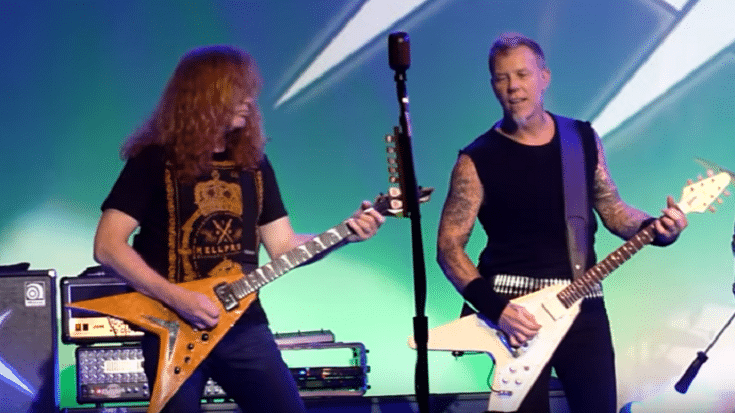 Dave Mustaine’s “Happy To Hear From Him”

It was May this year when Megadeth frontman Dave Mustaine received his throat cancer diagnosis. Even while his doctors hoped for a 90% success rate, Megadeth still decided to cancel the rest of their 2019 tour dates. A few months later on September, he released a statement that he was on his final round of treatment. He is set to reunite with his bandmates for their upcoming winter tour in Europe.

In a new interview with Rolling Stone, he revealed that he received an overwhelming amount of support from fans and also his fellow rockers including Metallica frontman James Hetfield.

He said, “It came as quite a surprise. A lot came from people that I knew but I didn’t know cared. Most notably, I got a text message back from my old brother, James Hetfield, and I was so, so happy to hear from him. Contrary to what anybody says and contrary to any of the act that we put on, I love James and I know that James loves me and cares about me. You can see that when the moment of truth is here and I’m telling the world that I’ve got a life-threatening disease. Who comes to stand next to me? James.”

Ozzy Osbourne and Paul Stanley also reached out to him. Back in 2017, Mustaine referred to Hetfield as “one of the best rhythm guitar players in the world.” Finally, all is well between them.