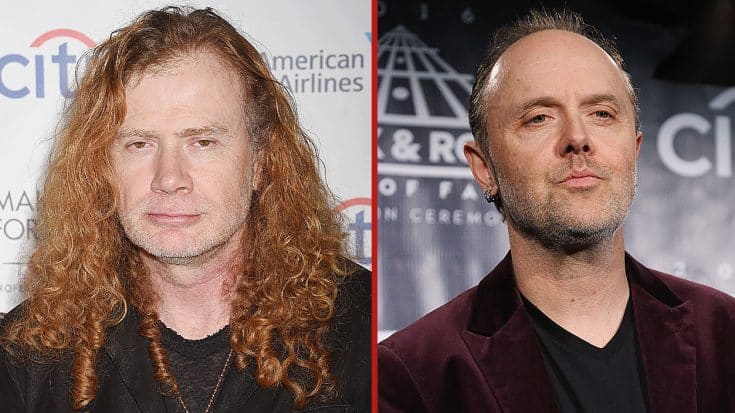 It’s no secret that Megadeth front man Dave Mustaine and Metallica drummer Lars Ulrich are not the best of friends. For those who don’t know, Dave was actually Metallica’s first guitarist. He was fired from the band for alcohol abuse and was replaced by current guitarist Kirk Hammett. Dave went on to start his own band Megadeth, thus the relationship between Dave, Lars, and all of Metallica for that matter has been rocky to say the least.

How do we know that it’s still like this? Well, because Dave had some scathing words for Lars in a recent interview with Greece’s Rock Hard magazine. In this interview Dave was asked about ‘No Life ‘Til Leather’, an extended tape featuring demo versions of songs off of Metallica’s first album ‘Kill ‘Em All’. Plans to release ‘No Life ‘Til Leather’ were ultimately scrapped due to a songwriting dispute between Dave and Lars. Here is what Dave had to say…

“I’m not gonna give Lars my credit, so I’m not gonna be part of it. I wrote all of “Mechanix”, I wrote all of “Jump In The Fire”, so me giving any percentage of that to Lars Ulrich, he can pound sand. And as far as the song “Phantom Lord”, I wrote every note of that music, James wrote all the lyrics. That’s 50/50. If James wants to give his percentage up to Lars because he’s afraid of him, that’s up to him. I’m not afraid of Lars Ulrich, and I’m not giving him my percentage. And the same thing with “Metal Militia”; I wrote every single note of that music, James wrote every note of that lyric — that’s 50/50. If James wants to give Lars his percentage, that’s fine if he’s afraid of him. I’m not afraid of him. I’m not giving nothing to Lars Ulrich. Now, they took it in the past, everybody knows that — and the past is the past. But I could not willingly enter into a new agreement with these guys predicated on Lars getting credit for something that not only he did not do but he was incapable of doing — he was incapable of writing songs that good back then.”

So yeah, I don’t think Dave and Lars are going to be grabbing lunch together anytime soon. It really seems like there are still a lot of issues that have to be worked out, but of course, as is standard in the world of rock & roll, you never know what may happen. Hopefully things will get better and we’ll get to hear this tape sometime in the future!