Dave Grohl Tears Up As He Leads Taylor Hawkins Tribute 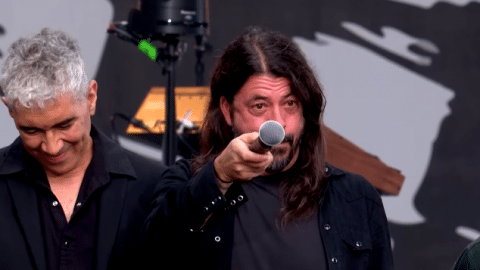 The first part of the tribute show for the late Foo Fighters drummer Taylor Hawkins has kicked off at Wembley Stadium, London. Frontman Dave Grohl led a tearful tribute to his friend and bandmate Hawkins at the start of an all-star concert.

The Foo Fighters were welcomed warmly by the fans as they walked in and before Grohl could even get a word out opening for the show with a speech, thousands of fans chanted “Taylor! Taylor!” prompting the singer to take a moment to let the sound wash over everyone. Grohl then emotionally said:

“Ladies and gentlemen, tonight we’ve gathered here to celebrate the life, the music, and the love of our dear friend, our bandmate, our brother, Taylor Hawkins.

“For those of you who know him personally, you know that no one else can make you smile, or laugh or dance or sing, like he could. And for those of you that admired him from afar, I’m sure you’ve all felt the same thing. So, tonight, we’ve gathered with family and his closest friends, his musical heroes and greatest inspirations to bring you a gigantic fucking night for a gigantic fucking person. So, sing, and dance, and laugh and cry and fucking scream, and make some fucking noise so he can hear us right now.”

While, the second leg of the Taylor Hawkins Tribute Concert is set to take place on September 27 at the Kia Forum in Los Angeles. Watch the video below.