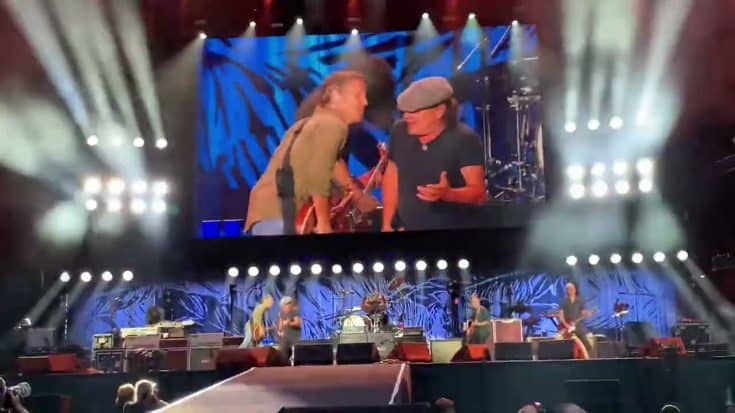 AC/DC and Metallica fans unite as frontman Brian Johnson and drummer Lars Urich paired up together with the Foo Fighters at the first leg of the Taylor Hawkins Tribute Concert held at Wembley Stadium, London.

Dave Grohl took third guitar, and was joined by Justin Hawkins of English rock band The Darkness as the band opened their set with “Back in Black.” Justin blended in perfectly despite struggling a bit with technical problems with his microphone. Following that strong opening was the track “Let There Be Rock,” which made the crowd, as well as the band, roar with excitement.

Johnson, delivered an energetic performance complete with air-guitar gestures while giving tribute to Hawkins towards the end of the song. He, Ulrich, and Grohl gathered for a group hug thereafter. Johnson and Hawkins meeting paths throughout their career lives were inevitable.

Hawkins was definitely a fan of AC/DC and it was seen in his side project Chevy Metal, where he regularly did AC/DC covers. Eight years later, Hawkins finally got to play with his hero during the Global Citizen’s VAX LIVE: The Concert to Reunite the World as the Foo Fighters invited Johnson to be their special guest.

The second leg of the Taylor Hawkins Tribute Concert is set to take place on September 27 at the Kia Forum in Los Angeles. Watch their tribute performance below.