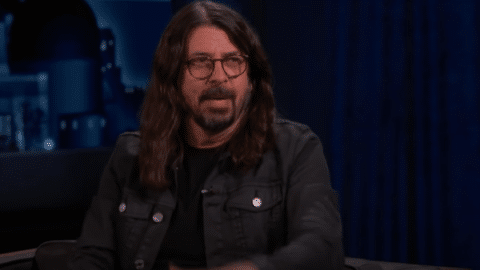 In a new interview with Jimmy Kimmel, Dave Grohl talked about his latest project.

He recently released his feature-length documentary film titled “What Drives Us” where he interviews some of rock’s biggest names. It chronicles the lifestyle of touring musicians and takes a look at the early touring days of bands like Metallica, U2, Red Hot Chili Peppers, and of course, Grohl’s own group Foo Fighters. Those he interviewed include Ringo Starr, Brian Johnson, Flea, Slash, Taylor Hawkins, Duff McKagan, Lars Ulrich, and Steven Tyler.

It’s never easy being on the road particularly for those who are just starting out.

“This film is my love letter to every musician that has ever jumped in an old van with their friends and left it all behind for the simple reward of playing music,” Grohl says in a press release. “What started as a project to pull back the curtain on the DIY logistics of stuffing all of your friends and equipment into a small space for months on end eventually turned into an exploration of ‘why?’ What drives us?’”

But “What Drives Us” isn’t just about the struggles and triumphs of touring, it’s also a homage to live music which is important in light of the pandemic and the lockdown restrictions that forced the cancellation or postponement of concerts and festivals.

The documentary is streaming on Coda Collection in the US and Amazon Prime Video abroad.