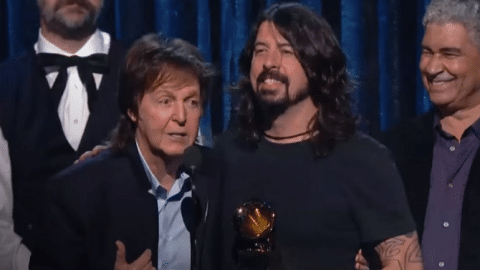 It Was Her First Piano Lesson

Foo Fighters frontman Dave Grohl has been busy promoting his upcoming memoir titled The Storyteller. In a recent interview on The Graham Norton Show, Grohl revealed that his daughter Harper received her first piano lesson from no less than Sir Paul McCartney.

This happened rather spontaneously one night when McCartney and his wife stopped by the Grohl’s house for pizza and wine.

“Paul and [his wife] Nancy were leaving and there was a piano in the corner of the room, and he just can’t help himself,” Grohl recalled. “So he sits down at the piano and starts playing ‘Lady Madonna’… In my f**king house! My mind is blown, I can’t believe this is happening. This is like the most crazy full-circle moment of my entire life.”

Harper was only five years old then and she watched Macca play the piano. After which, she just “goes to the kitchen and gets a coffee cup, puts some change in it and puts it on top of the piano like it’s a tip jar.”

“She’d never taken a lesson to play any instrument at that point and she sat down and watched his hands,” Grohl explained. “They sat down together, and he was showing her what to play, and they wrote a song together.”

The next day, Grohl saw Harper playing “the song they’d written the night before.” But it seemed like Harper wasn’t that interested in playing the piano because she declared she would rather be a drummer like her dad.