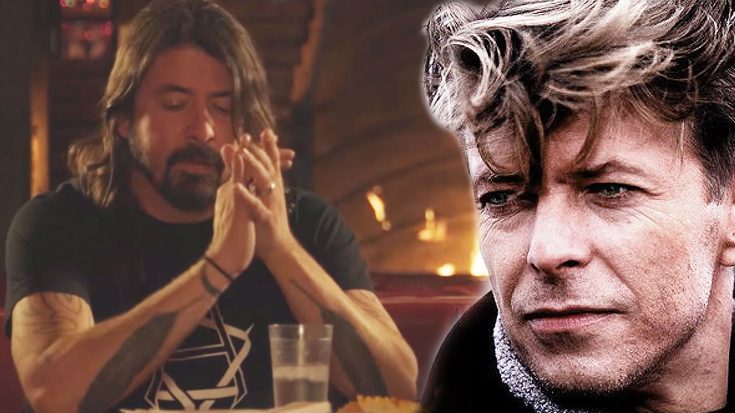 A few months following David Bowie’s passing, Dave Grohl and Pat Smear of the Foo Fighters drove around Los Angeles/Hollywood reminiscing about their memories and stories with the iconic artist. Grohl and Smear visited historic sites that were significant throughout Bowie’s life, including old homes, venues he performed at and recording studios. Following their drive, Smear and Grohl make a stop at the famous Rainbow Bar & Grill where Grohl reveals details about his funny and unique friendship with Bowie. He recalls an instance where he emailed Bowie to ask if he would work with him, to which Bowie respectfully declined and then jokingly (Grohl assumes he was joking, at least) told him to “f*** off!”

Following an exchange where Grohl teased Bowie about not collaborating on his birthday like they did at Madison Square Garden back in 1997, Bowie sent back a grim and haunting response.

Bowie replied to Grohl, “No More Birthdays, I’ve run out of them.” Bowie then quickly shot back another email that cleared he was joking, and referred to their previous collaboration as very fun and enjoyable.

In hindsight, Bowie’s response is super dark and eerie. Dave says he had emailed him a few years ago, which would’ve been around the time Bowie was diagnosed with liver cancer, the ultimate cause of his death. Bowie was probably alluding to the fact that his life was coming to an end, and knew he was inevitably going to succumb to his disease.

You can watch Dave Grohl and Pat Smear’s trip down memory lane, and talk about David Bowie in the video down below! Grohl started talking about the emails at about the 7:04 mark.