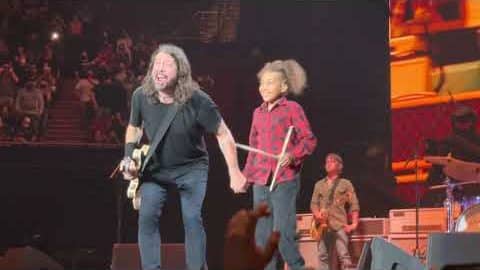 He Finds Her Passion In Music Inspiring

Dave Grohl and Nandi Bushell have been keeping us all entertained since the lockdown. It all began with a series of epic virtual drum battles in 2020, and last August, Bushell got the once-in-a-lifetime chance to play live with Foo Fighters in Los Angeles. She joined the band on stage to perform their classic hit “Everlong”, and it was the best thing ever.

It’s no secret that the drum prodigy has won the admiration of Grohl. And well, he now has more praises for her.

In a new interview with Rolling Stone magazine, Grohl talked a bit about Bushell.

“If you want to see the true meaning of rock & roll, watch Nandi play the drums,” he said. “That is as inspiring as any Beatles record, any Zeppelin record, any AC/DC record, any Stones record. To watch her play the drums and see her passion and belief in this music … if that doesn’t inspire you, I don’t know what will.”

“So, the fact that we got to share a moment with her onstage makes all of this worthwhile,” he continued. “And the funniest thing is, after jamming with Nandi, “Everlong” went back on the charts.”