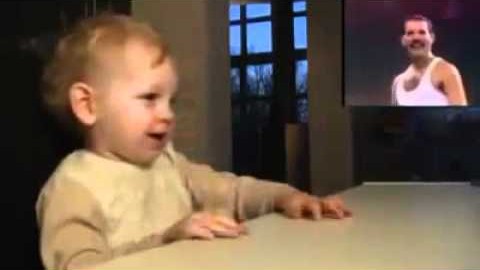 This cute toddler already seems to know good music! Queen’s Freddie Mercury was known to be able to put on some of the greatest rock shows of all time – he was a total performer. One of his famous moments was when he was performing “Under Pressure” at the Live Aid concert where he entices the crowd to follow him with the “ay oh!” chant. I mean, we’re talking about thousands and thousands of people who packed out Wembley stadium, doing exactly what Freddie said. It will give you goosebumps.

“It was hard, because you had four very precocious boys and David, who was precocious enough for all of us. David took over the song lyrically. Looking back, it’s a great song but it should have been mixed differently. Freddie and David had a fierce battle over that. It’s a significant song because of David and its lyrical content.” – Brian May

This video is too stinkin’ cute – we’re grinning from ear to ear while watching this. The little guy repeats the ay-oh chant and also raises his first just like Freddie as he follows along and is caught up in the moment – that would have to be our favorite part here. You can’t help but to just smile at this! Good taste in music knows no age and this proves it.

It’s funny because while most kids would be entertained by cartoons and wouldn’t really know what’s going on, this kid follows along and seems to know how to sing along! Now that’s parenting done right. Showing kids what REAL music is, from a young age. This is how you pass on the love for rock ‘n roll to the next generation. Freddie must be smiling down from heaven looking at how his music will live on.