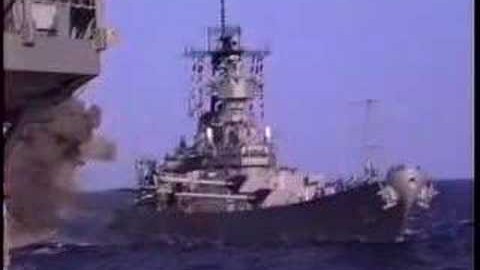 Looking At This Will Make Your Heart Swell With Pride!

Call her whatever you like, “Mighty Mo” or “Big Mo”, the USS Missouri (BB-63) became the Empire of Japan’s site of surrender that eventually led to the end of World War 2. This Iowa-class battleship was commissioned on June 11, 1944 and its motto is “Strength for Freedom”. It was awarded 11 battle stars and is currently a museum ship. It has served in World War II, the Korean War and the Gulf War.

In the Pacific Theater of World War II she fought in the battles of Iwo Jima and Okinawa and shelled the Japanese home islands, and she fought in the Korean War from 1950 to 1953. She was decommissioned in 1955 into the United States Navy reserve fleets (the “Mothball Fleet”), but reactivated and modernized in 1984 as part of the 600-ship Navy plan, and provided fire support during Operation Desert Storm in January/February 1991.

This is one glorious footage where you can clearly see (and hear!) her firing her big guns. She’s so powerful it makes you wonder how she’ll fare with modern war ships. This is undeniably of the greatest.