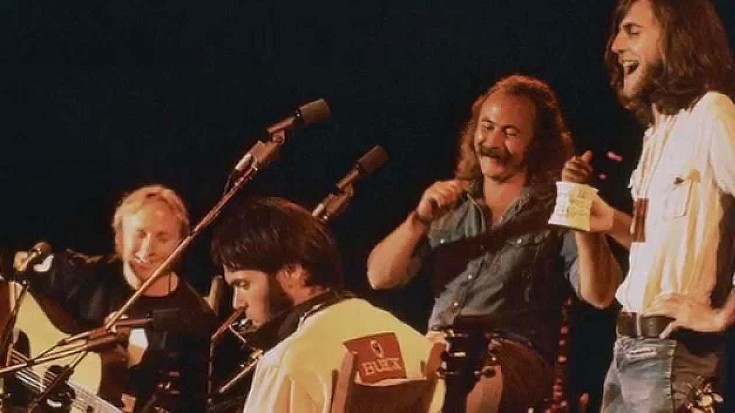 In the summer of 1974, famed Woodstock supergroup Crosby, Stills, Nash & Young came together for what was considered the biggest tour ever attempted – a record setting romp across America that featured marathon performances of classics like “Ohio” and “Our House”. Neil Young, recovering from the commercial failure of his albums Journey Through the Past and Time Fades Away, brought his 1972 smash hit “Old Man” along for the ride, treating fans new and old to a refreshing take on the classic, this time featuring the help of Crosby, Stills, and Nash on guitar and vocals.

“Old Man” has always been one of our favorites – after all, who could forget Neil’s ever iconic performance of it just three years earlier – but there’s something about hearing “Old Man” as a shared project from one of the greatest supergroups in the world that puts a special burn on it; proving that no matter how far apart David, Stephen, Graham and Neil might venture from each other during one of their many periods of squabbling, they’re infinitely better together than they are as four separate parts!

“I think the tour made just over eleven million dollars, which of course was a lot of money in those days.” – Graham Nash

The audio you’re about to hear was ripped from a show on CSNY’s reunion tour, and it’s everything we ever wanted; Neil’s plaintive vocals begging an elder to remember what it’s like to be young with the rock solid three part harmony provided by bandmates Crosby, Stills and Nash, capped off by the roar of the audience lucky enough to witness a huge moment in music history. If you weren’t there, never fear: relive one of the coolest moments in CSNY history with the audio below!