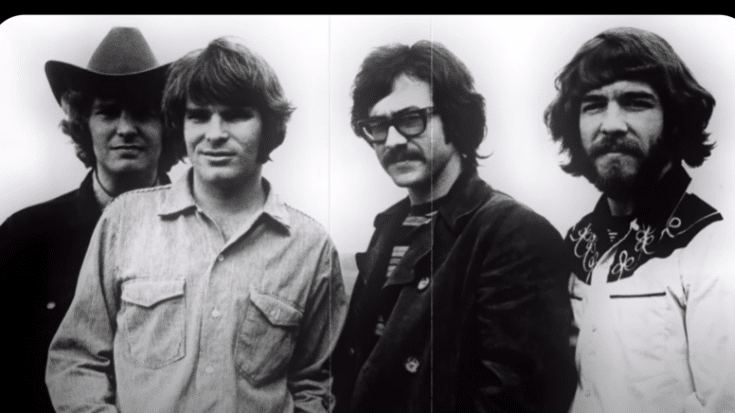 John Fogerty is a genius. During Creedence Clearwater Revival’s glory days, he wasn’t just the main creative force but he singlehandedly wrote and composed most of their classic hits – songs that stood the test of time and still sounds fresh even after all these years.

Now we look back at their catchiest and most memorable riffs.

An underrated gem in their catalog, Fogerty built the song around a single riff. Clocking in at over seven minutes, it also features a glorious solo.

9. Lookin’ Out My Back Door

Like the other songs on this list, it’s catchy from the get-go. While a lot of fans believed the lyrics were about drugs, John Fogerty clarified that he actually wrote it for his then-three year old son Josh and he even found inspiration from the Dr. Seuss book And to Think That I Saw It on Mulberry Street.

Originally by Dale Hawkins, it features stellar guitar work which is one of the highlights of the track. It’s their only top 40 hit which wasn’t written by Fogerty. He added the main riff from “Smokestack Lightning” following the second verse. He said, “I knew I needed to work on arranging the song so that the band would sound like Creedence Clearwater Revivial, would sound professional, mysterious and also have their own definition. The song I chose was ‘Susie Q.’ I decided not to wring the song myself. I decided to pick something that existed because it’d just be easier. I’d be less self-conscious about doing things.”

One of their best-known songs, Fogerty got the idea for that iconic chord riff while messing around with Beethoven’s “5th Symphony.” But like the genius that he is, he simply tweaked it a bit.

6. Have You Ever Seen The Rain?

Released at a time when there were protest songs left and right, people thought it’s about the Vietnam War. But Fogerty explained that it’s about the rising tension within the band, that even though they were at the top of their game and were massively successful, they weren’t happy. It wasn’t long before Tom Fogerty left the group.

Built on that strong opening riff, John Fogerty told Mojo magazine: “More common is me fooling around on the guitar coming up with a riff or a lick or even just a tone which sparks some kind of creativity. Your mind gets a vibe, like the lick for ‘Green River’ – that’s what it sounded like, a green river, ha ha. And that was a title I had carried around since I was about eight years old.”

Another legendary riff from CCR, Fogerty said on The Voice: “The thoughts behind this song – it was a lot of anger. So it was the Vietnam War going on… Now I was drafted and they’re making me fight, and no one has actually defined why. So this was all boiling inside of me and I sat down on the edge of my bed and out came “It ain’t me, it ain’t me, I ain’t no senator’s son!” You know, it took about 20 minutes to write the song.”

3. Down on the Corner

It may be a simple riff but it’s unforgettable. Fogerty got the idea from an unlikely inspiration – “an ad from Disney that said in great big letters ‘Winnie the Pooh’. Something in my brain said ‘Winnie the Pooh and the Pooh Boys’.”

2. Born on the Bayou

Fogerty has never been to the bayou when he wrote it. He recalled, “We were the #7 act on the bill, bottom of the totem pole. And as the first guys to go on, we were the last to soundcheck before they opened the doors. It was like, ‘Here’s the drums, boom, boom; here’s the guitar, clank, clank.’ I looked over at the guys and said, ‘Hey, follow this!’ Basically, it was the riff and the attitude of ‘Born on the Bayou,’ without the words.”

Fogerty said he borrowed the song’s lick from Elvis Presley’s “I’m Left, You’re Right, She’s Gone.” He added, “I’d come up with the chords and melody and I got the phrase ‘bad moon rising’ from this little book I’d kept song titles in since 1967. I didn’t even know what it meant, I just liked how the words sounded.”