Comedian Joins Ritchie Sambora On Stage For A Hilarious, Unforgettable Performance Of ‘Wanted Dead Or Alive’! 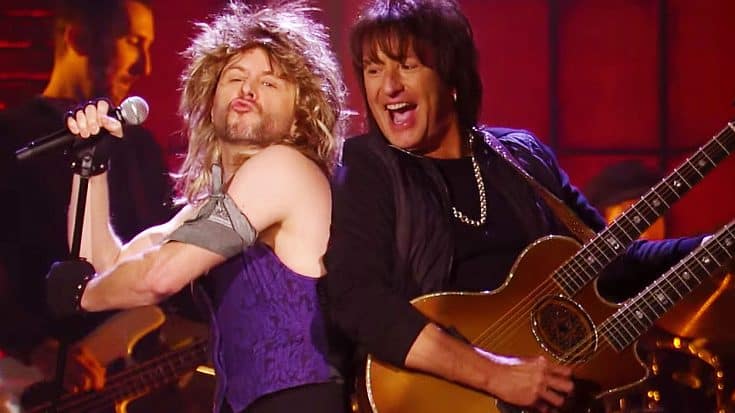 It’s always wonderful when comedy and music blend together. One of the best shows on Comedy Central is called the Goddamn Comedy Jam. The show features a comedian each episode, as well as a legendary rock n’ roll band. The two will tell stories, make jokes and cap off the episode with an amazing performance!

On a recent episode, comedian Chris Hardwick was featured with rock band Bon Jovi. Chris is known for hosting the show @Midnight and mentioned in the episode that he is a huge fan of Bon Jovi. Chris dressed up as Jon Bon Jovi, and was joined on stage by Ritchie Sambora! The two of them performed an amazing, and hilarious cover of “Wanted Dead or Alive.” The two sang karaoke style and gave everyone in the theater a great laugh! Chris actually has a pretty decent voice, and of course Ritchie sounded amazing as usual!

Fun Fact: Jon Bon Jovi and Richie Sambora wrote this in the basement of Sambora’s mother’s house. They wrote it in one day, it came easily because it was about their actual experiences touring.