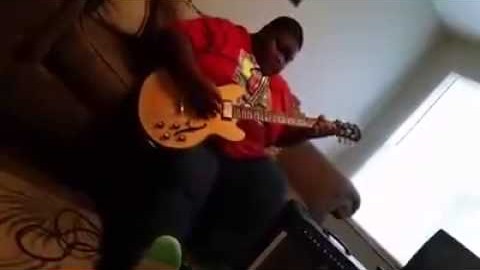 15 yr old From Mississippi Shreds The Guitar Up

Could he be the next Eric Clapton or Stevie Ray Vaughan? At the age of 15, Christone Ingram has already played in The White House. Wow, I’ll let that sink in for a moment. He doesn’t just have some serious skills but he clearly has old soul and that’s something you can’t teach. The first song is “Sunshine of Your Love” by Cream, by the way. The blues music is definitely in good hands!

With elements of hard rock, psychedelia, and pop, it is one of Cream’s best-known and most popular songs.

This young shredder is also popularly called “Kingfish” and he’s been playing some gigs when he was just in seventh grade! I can’t even remember doing something awesome at that age. 🙂 Oh and did I mention that B.B. King’s drummer, Tony Coleman, loves this teenage guitar virtuoso?

“There was no place I probably wouldn’t be gigging … I got hooked. This is what I am going to be playing for the rest of my life,” he says.

We can’t wait to hear more from Kingfish!