Christine McVie & Lindsey Buckingham’s New Song, “In My World” Is Here, And We’re Head Over Heels In Love 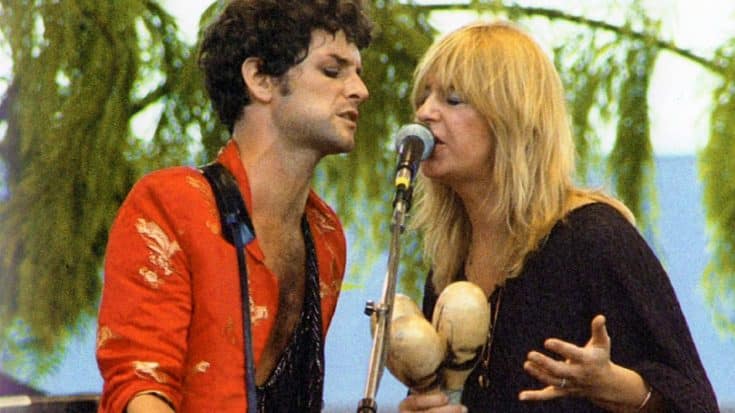 So we’re still a little bummed about the very real possibility that Fleetwood Mac are finished making albums, but on the bright side we’ve got Christine McVie and Lindsey Buckingham, who sucker punched us this morning with their brand new song, “In My World”. The debut single from the pair’s upcoming album, “In My World” marks the first time Lindsey and Christine have worked together since Fleetwood Mac’s 1987 album Tango In The Night, currently celebrating its 30th anniversary with a deluxe reissue, and finds the pair exploring the sonic soundscape we’ve come to know and love from Fleetwood Mac but with one glaring difference: it’s on their terms.

“We were exploring a creative process, and the identity of the project took on a life organically,” Buckingham says in a press release.

“The body of work felt like it was meant to be a duet album. We acknowledged that to each other on many occasions, and said to ourselves, ‘What took us so long?!'”

What NPR calls equal parts ‘whimsy and wistful,’ “In My World” showcases the best that Buckingham-McVie have to offer; rock solid lyrics telling a story about love and loss mixed with a little wishful thinking as Buckingham breathes his way through lines like “In my world, everybody stays/Nobody wishin’ for words they couldn’t say,” highlighted by McVie’s crystalline harmonies and the sweeping guitars and twinkling piano we’ve come to know and love from these two over the years.

The album, simply titled Lindsey Buckingham/Christine McVie, is due out on June 9th through Atlantic Records, but since that’s just a little too long to wait for fans who have been itching for anything new from the Fleetwood Mac camp, check out “In My World” in the audio below. Enjoy!