Chris Stapleton Performs “You Should Probably Leave” With Jimmy Fallon 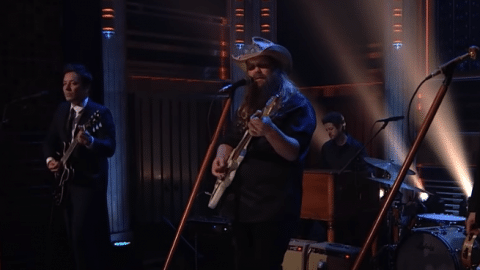 Chris Stapleton appeared on The Tonight Show Starring Jimmy Fallon on Tuesday night, October 5. Host Jimmy Fallon joined him and played the rhythm guitar after Stapleton’s usual guitarist, Dave Cobb, was suffering from an earache and couldn’t make it to the show.
Fallon told his audience that the country singer sent him a message the night before telling him he needed a guitar player for his performance.

“I got a text last night from Chris, saying his guitarist Dave Cobb has an earache and so he could not travel,” Fallon said. “He couldn’t fly on the plane — he’s fine, he just couldn’t fly. [Chris] said, ‘I need a guitarist.’ And I said to Chris, ‘Say no more.'”

“We actually got on the phone and FaceTimed last night,” Fallon revealed before the camera panned to Stapleton. “You tried to teach me the licks and the chords of the song and I’m going to try my best.”

To be fair, Fallon didn’t disappoint. He even played a guitar solo before the final chorus. Watch their performance below.