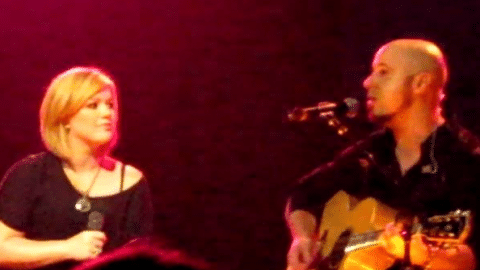 In 2010, Kelly Clarkson joined Chris Daughtry on stage at his concert in Nashville for an acoustic duet of Tracy Chapman’s 1988 classic Fast Car. It’s an emotionally-charged cover and we think they should record it in the studio because it’s a killer version.

Tracy Chapman released Fast Car as the lead single of her self-titled debut studio album. It was a hit on both sides of the Atlantic and received two Grammy Award nominations for Record of the Year and Song of the Year. Chapman explained to Q magazine, “It’s not really about a car at all… basically it’s about a relationship that doesn’t work out because it’s starting from the wrong place.”

Chapman was still relatively unknown to the rest of the world when she appeared on the Nelson Mandela 70th Birthday Tribute at Wembley Stadium, London. The concert was broadcast to 67 countries and had an audience of around 600 million.

She performed twice and it catapulted her to stardom. She was supposed to go on stage just once but later in the evening when Stevie Wonder was delayed, she was asked to play again. Prior to the event, she sold around 250,000 copies of her album but after her appearance, her sales reportedly climbed to two million.