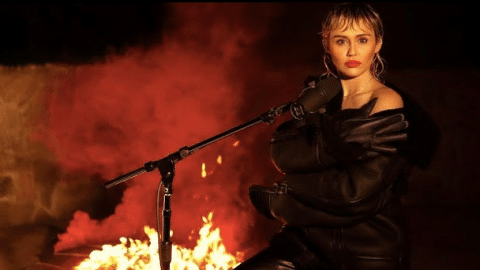 This isn’t Miley Cyrus’ first foray into classic rock but it’s definitely one of her finest moments. During the “At Home” edition of “Saturday Night Live” last April 2020, Cyrus surprised viewers with a dark and haunting take on Pink Floyd’s 1975 single Wish You Were Here. Along with her producer Andrew Watt on acoustic guitar, she knocked it out of the park.

With her raspy vocals, Cyrus remained faithful to the original version but added a bit of her own twist to it. She performed beside a fire pit which cast a red glow on her and Watt, only adding a rather spooky vibe to her cover.

She previously performed another Pink Floyd classic Comfortably Numb at Las Vegas’ iHeartRadio Music Festival in 2019. She may be best known for her pop songs but she’s pretty at home with her rock ‘n roll renditions.

Some of her best performances include Blondie’s Heart of Glass, the Eagles’ Take it to the Limit, Led Zeppelin’s Black Dog, Metallica’s Nothing Else Matters, Nine Inch Nails’ Head Like A Hole, Tom Petty’s Wildflowers, Bob Dylan’s Baby, I’m In The Mood For You, Fleetwood Mac’s Landslide, The Beatles’ Lucy in the Sky With Diamonds, and of course, Joan Jett & The Blackhearts’ I Love Rock’N’Roll.