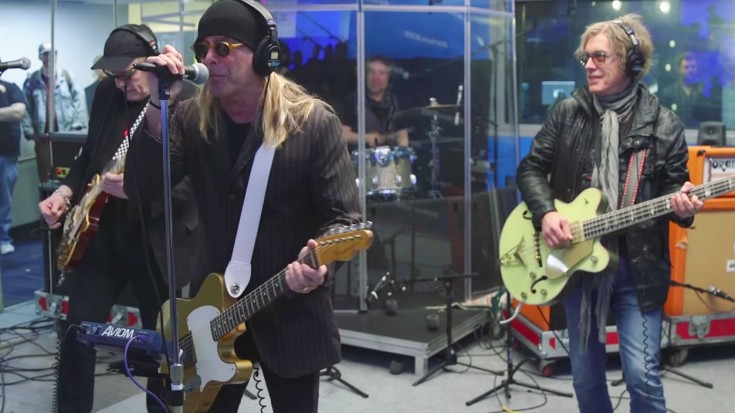 Between a critically acclaimed brand new album and their induction into the Rock And Roll Hall of Fame in April, if ever there was a band who deserved to celebrate, it’s Cheap Trick! Before the festivities began, fans saw the band marking both milestones by stopping by SiriusXM for an exclusive Town Hall that allowed them to chat with fans, doubling as an intimate in-studio performance of some of their biggest hits that had the entirety of SiriumXM’s office gathering in the hallways to catch a glimpse at the Hall of Famers.

With a setlist that included brand new single “When I Wake Up Tomorrow” intermingled with classics like “Surrender” and Fats Domino cover “Ain’t That A Shame,” Cheap Trick closed out the celebration with “I Want You To Want Me” – and we just can’t get enough of how much fun the guys were having!

Rick Nielsen Looks Back On 4 Decades Of Cheap Trick

The guitarist says that he and his bandmates are “the luckiest people on earth” because they “get to play music that we like to do…with great guys. I mean, these are my brothers.

I’d kill for them, but I also want to kill them occasionally. But it’s fantastic. We get to go around the world, and a lot of people like us.”

Clearly on top of the world as they prepared to mark the biggest moment of their career, “I Want You To Want Me” becomes more than just a performance of one of their most iconic songs – it’s victory personified for Cheap Trick, and a triumphant look back on a career as bright and wonderful as the future that lay ahead of them.