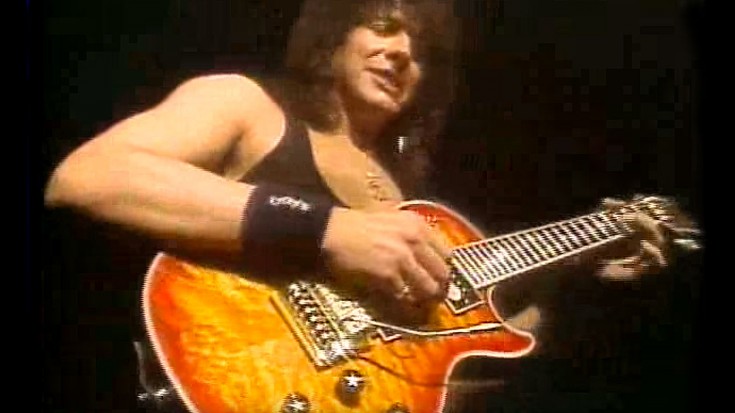 In a band known for power ballads and arena anthems, Richie Sambora brought a much-needed element of rock and roll to Bon Jovi. Our favorite New Jersey party boy is as well known for his unique, brash approach to guitar playing within Bon Jovi as he is for his wild sense of humor, and it was in his songwriting within the band that we were really able to see exactly how talented Richie is.

A major staple of Bon Jovi concerts centered around Sambora’s guitar playing; whether it was rocking a 3-necked guitar for songs like ‘Wanted Dead Or Alive’ or in this case, delivering a blistering 4 minute solo, Richie’s moment to shine never disappointed, and always left us wanting more.

This 1985 footage features a brief break in a Bon Jovi show, with Jon Bon Jovi graciously leaving the stage – but not before introducing the ever talented Richie Sambora. Suddenly the lights drop and the spotlight is on Sambora, who launches into a 4 minute long solo and after a moment it’s hard to tell who’s having a better time – Richie or the sold out crowd in front of him! He’s a fantastic guitar player, but what really sells this performance is the passion behind it ; we wondered who was having a better time, and by the end of the solo it was clear that it was definitely Richie!