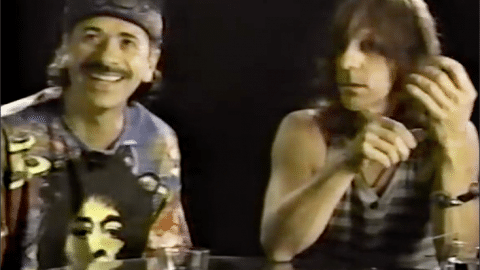 From a successful musician’s perspective, there is no relative answer for success- there’s just one piece of advice. Carlos Santana and Jeff Beck sat down in 1995 during their tour to discuss their triumphant shows. They spoke from their heart and humbly explained to the interviewer why their performances are so loved.

“If we emanate harmony to people, you know, they go home they’re inspired to cook a better meal or to write a better poem, make better love. It’s like John Coltrane said, ‘One positive thought creates millions of positive vibrations,” explains Santana.

The musicians talk about being fearlessly devoted to what you’re truly passionate about- whatever that might be. If you feel the music, so does the audience. If you love what you do, you’ll master it. Seems like common sense but it’s definitely much easier said than done.

Jeff Beck and Carlos Santana toured together in 1995 to promote two individual projects. Carlos Santana had released a three CD set, “Dance of The Rainbow Serpent.” Jeff Beck released the collector’s must have, “Best Of” album. Both the guitarists played their best hits. Their solos were respective of their iconic signature sounds. Carlos went into solos for R&B and multi-faceted Latin numbers. Most nights, Santana would close the shows. Jeff Beck did what he loves most- play blazing jazz solos. He stretched out Charles Mingus’ “Pork Pie Hat,” for a memorable show. Often, Beck would perform up to 90-minute solos- regardless if the crowd sat for the entire track.

Jeff Beck’s advice was an encapsulation of what Santana had told him while touring, “They’ve come to see us play. They don’t care what we play. They’re not demanding in any sense. They’re not expecting a top hit album or the current thing- it’s just let’s go check this out and that’s a really nice thing.”

In other words, if you want a successful gig- play for you, not them.  If you don’t love what you do, you’ll never succeed.