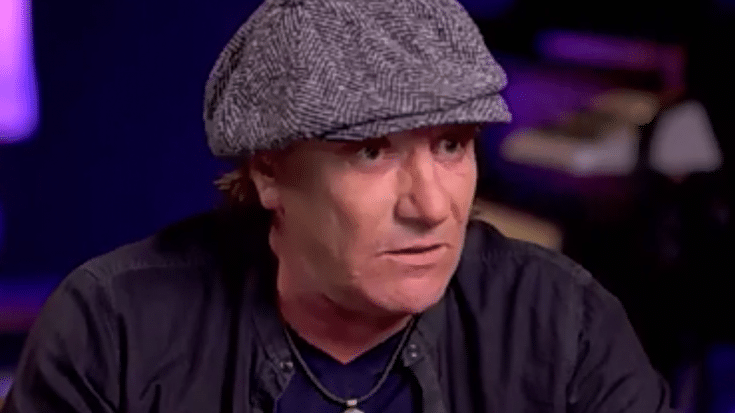 Back in Black may be a monolithic record but AC/DC wasn’t without struggles when they worked on it. But apparently, it was more than just losing their frontman Bon Scott. Most people know that Brian Johnson stepped in and AC/DC cemented their spot in the rock ‘n roll pantheon. In a recent interview with Dan Rather for AXS TV’s The Big Interview, however, Johnson admitted that he also had his share of problems while working on the album – and it was in the form of a writer’s block.

He talked about the moment he found enough inspiration to write the classic hit “Hell’s Bells.”

“I remember about five songs in, and I was going, ‘Gosh darn it, I think I’ve just ran out of lyrics.’ And Mutt Lange, the producer, came down, and he could see I wasn’t my chirpy self at breakfast. … He said, ‘Is everything all right, Brian?’ I said, ‘I’m just struggling a little bit here.'”

A tropical storm rolled in while Johnson and Lange were talking. Johnson added:

“It was a real bad day, the likes of which I’d never seen before. … It’s called a tropical storm. The sky went all black, and that thunder! [Lange] went, ‘Oh, it’s rolling thunder,’ and I went, ‘Rolling thunder, pouring rain, coming on like a hurricane. There’s white lightning flashing’. I mean, I was literally giving a weather report! When great things are happening so quickly, you never realize, do you? It’s so fabulous. It just looks so easy. … When you try to do it again, it never works!”

Check out the rest of the interview as the popular series premieres on October 1. Other guests include Cheap Trick, Chicago, Bret Michaels, Alice Cooper, and YES’s Jon Anderson.