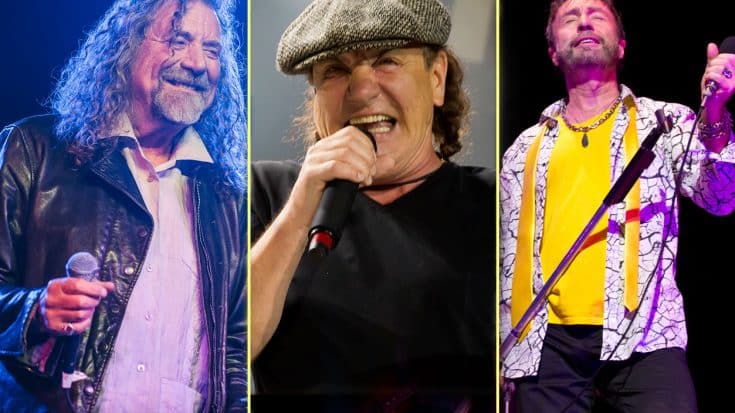 Last year was a rough one for the rock world. We lost a staggering number of legends and idols one right after the other and if death didn’t claim them, time did as in the case of AC/DC frontman Brian Johnson, sidelined and no longer able to perform live due to the threat of permanent hearing loss. After being forced out of AC/DC by his condition, it was up in the air as to whether or not Johnson would ever be able to perform onstage ever again, leaving fans to wonder if that was the last they’d seen of one of rock’s most beloved frontmen – but happily, it wasn’t.

Last night, for the first time in over a year, Brian Johnson took to the stage once more, joining fellow rock legends Robert Plant and Paul Rodgers onstage in Oxford, England for an encore performance of Barrett Strong’s 1959 classic “Money.”

A once in a lifetime moment if there ever was one, the performance came during the 6th stop on Rodgers’ 14-date Free Spirit Tour, blowing away the audience who had only banked on seeing Paul Rodgers perform their favorite Free tunes and never in a million years would have guessed that the frontmen of two of rock’s most iconic bands would join in on the fun!

Brian sounds absolutely amazing, which isn’t a surprise; he’s spent the last year working on music with The Greg Billings Band and was even featured on comedian Jim Breuer’s 2016 album Songs From the Garage – but we’d be lying if we said we weren’t a little concerned and curious about how he was able to perform last night, considering that the in-ear monitors designed by Stephen Ambrose of Asius Technologies aren’t quite ready yet for everyday use, according to Ultimate Classic Rock. In any event, here’s to Brian for getting back where he belongs: the stage!