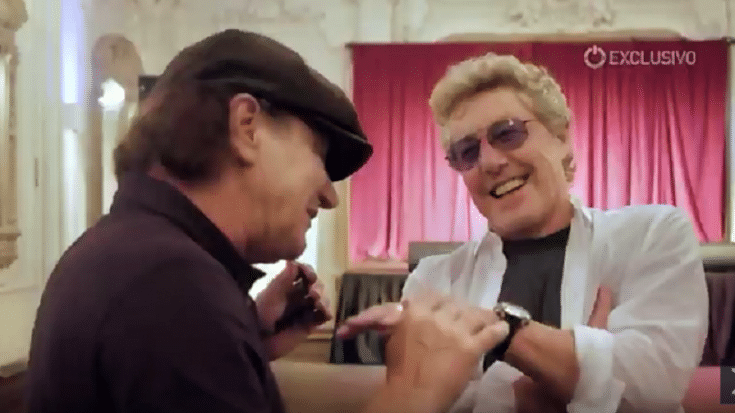 Being A Frontman Isn’t Easy

Though there’s still no confirmation, only speculations, about Brian Johnson fronting AC/DC again and working on a new album, he sure has been busy for the past few months. His TV series Brian Johnson: A Life on the Road features Johnson chatting and hanging out with some of the biggest names in rock like Robert Plant, Joe Elliott, Sting and Roger Daltrey.

In a recent episode, he sits down with Daltrey while talking about originality and how at one point, they all imitated The Rolling Stones frontman Mick Jagger.

Daltrey said, “Watching people like Wilson Pickett and how they worked the stage, you kind of learned from them and I kinda thought, I gotta develop something that is a little bit bigger. See, everything had felt like it had been done. Dave Berry had done the thing with the microphone lead and he did all that sexy stuff with the mic, and all that was kind of cool. I thought, ‘Well, I can’t do that, Mick Jagger was doing his dancing.'”

He also told Johnson, “You did a bit of the Mick Jagger for a while you know, we all copied them. But then you think, ‘Ah I can’t be that, he’s Mick Jagger – what do I do?’ So one night I just threw the microphone, grabbed the lead and it came back. I thought – well that’s interesting!”

You can watch the next episodes on AXS TV every Sunday at 9/8c.