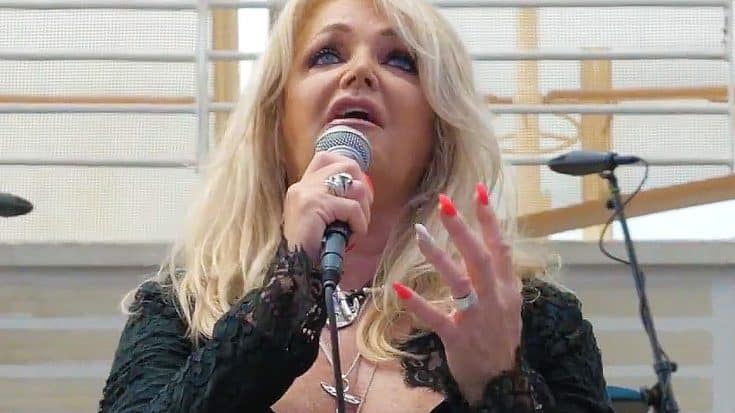 It’s not everyday that a celestial event warrants its own song, but that’s exactly what happened on Monday when the long awaited solar eclipse made its way across America for the first time since 1979, bringing people together from every corner of the country as they raced for front row seats to the event of the season. Among those getting in on the excitement of the day was Welsh singer Bonnie Tyler, who made headlines in the days leading up to the big event with news that she would be ushering in the solar eclipse with a performance of her 1983 ballad “Total Eclipse of the Heart” while on a cruise ship, and she did not disappoint.

Fun Fact: “Total Eclipse of the Heart” had to be cut down from over 8 minutes in length to just 2 minutes and 40 seconds – the exact length of time the solar eclipse lasted

With the help of Joe Jonas’ band DNCE, Bonnie wailed her way through “Total Eclipse of the Heart” to the delight of cruise ship passengers and fans around the world eagerly awaiting the chance to hear it set against such an historical event, passion and raw power fueling her signature rasp and hitting just as hard as she ever did. Even better? Once her performance wrapped, Bonnie rocketed to the top of the charts, dominating iTunes and toppling Luis Fonsi’s chart topping “Despacito” by snagging the coveted #1 slot with over 12,000 downloads.

Here’s to making history not just once, but twice in one day! Check out Bonnie Tyler and DNCE’s performance of “Total Eclipse of the Heart” in the video below, and for old time’s sake, we’ve included the original music video for your viewing pleasure. Enjoy!