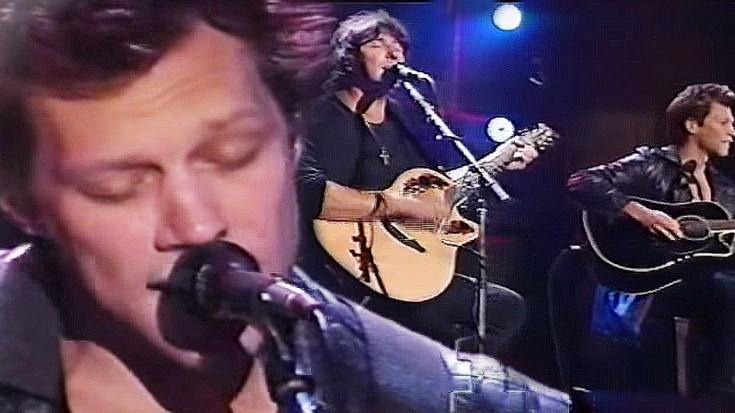 Richie and Jon Take The Stage

Bon Jovi was one of the biggest bands on the planet, and for good reason; the combination of Richie Sambora and Jon Bon Jovi made for a vocal and musical powerhouse that was virtually unstoppable, and this unplugged rendition of their iconic ‘Wanted Dead Or Alive’ is a testament to that chemistry! In 1996 the duo took the stage together for an unplugged performance that featured several of their biggest hits, but by far the crowd favorite was ‘Wanted Dead Or Alive’ – the western themed song about the lonely life of a rockstar.

This was the song that kickstarted the “Unplugged” craze. At the 1989 MTV Video Music Awards, Jon Bon Jovi and Richie Sambora performed this with just their acoustic guitars, giving the network the idea for the “Unplugged” series.

This performance is so incredibly special because it not only featured Richie Sambora sharing vocal duties and giving us a glimpse into what his voice could actually do on its own, but the entire performance was to benefit AIDS research, too!

It’s all the same, only the names will change
Everyday, it seems we’re wastin’ away
Another place where the faces are so cold
I drive all night just to get back home

Sometimes I sleep, sometimes it’s not for days
The people I meet always go their separate ways
Sometimes you tell the day
By the bottle that you drink
And times when you’re all alone all you do is think

Oh, and I’m a cowboy, on a steel horse I ride
I’m wanted dead or alive

I walk these streets
A loaded six-string on my back
I play for keeps ’cause I might not make it back
I been everywhere, still, I’m standing tall
I’ve seen a million faces
And I’ve rocked them all