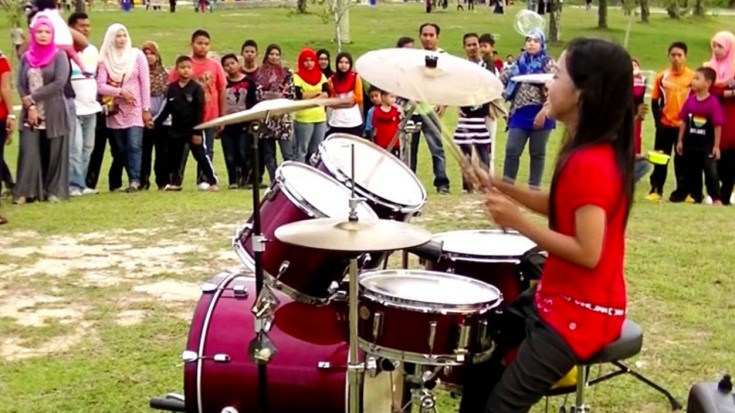 The cool thing about music is, it doesn’t matter what language you speak or what country you’re from, you can still understand what it means to rock out! Guns N’ Roses is one of the most iconic rock groups of the 80’s that a lot of kids even from this newer generation, still listen to. Here we have this young lady who does a pretty spectacular job at covering songs on the drums and in this case, plays “Sweet Child O’ Mine” outside in the middle of the park. Now that is freaking rockstar.

Nur Amira is just 12 years old and it’s her first time doing the “Outside Series” of videos. Looks like a success!

The funny thing about this is, it’s obviously a south east Asian country she’s from based on the hijabs you see on the women there from Malaysia, so this isn’t your typical Western crowd. There isn’t that much of a reaction. LOL! But one thing people can understand is how rock music just sounds like a good time. And as you can see from people gathering around, Nur Amira just doesn’t give a damn. She’s gonna play, they’re gonna listen, and rock music is going to live on anywhere the hell it wants!