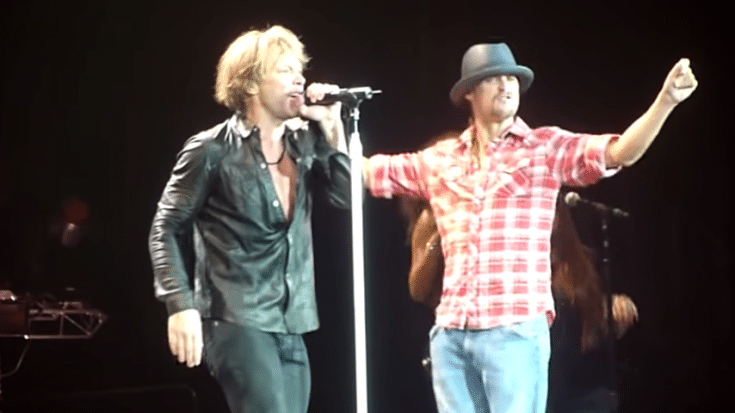 Bon Jovi and Kid rock turned the stage into a dance floor back in 2010 during a cover of Bob Seger’s “Old Time Rock and Roll.” The 02 Arena in London was packed with 187,696 fans during Bon Jovi’s The Circle Tour. According to Billboard, Bon Jovi’s tour was  the highest grossing tour of 2010, raking in over $200 million. People who flocked to the concert definitely had good reason.

Sax, Dance, and Rock and Roll

Bob Seger wasn’t the only Michigan rep during the show. Jon brought out Michigan-born Kid Rock to join in and rock out with the band- saxophonist included. The backing vocalists were feeling the vibe and joined the rock stars. Everybody was feelin it!

Don’t Try and Take Me To No Disco

With the success of the band’s tour, Jon Bon Jovi was surely in the celebratory mood. Kid Rock was among a list of bands that included Train, OneRepublic, Dashboard confessional, and Fuel who won Bon Jovi’s SuperBAND Tonight contest. The contest was put forth for North-American bands to get the opportunity to open for Bon Jovi at their major shows. Kid Rock opened for more a few shows and rocked the arena for thousands of fans.