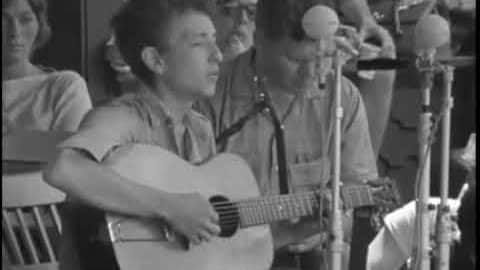 On Friday night, musicians including Bill Frisell, Sara Bareilles, Margaret Glaspy, Joe Henry, Julian Lage and the McCrary Sisters, are among the acts who performed to commemorate Bob Dylan‘s 1963 debut at the Town Hall in New York City.

Six decades earlier, the Town Hall is the same exact place where Dylan made his debut. The historic venue in Manhattan’s Theater District that first opened its doors in 1921 saw his first large-scale concert. T Bone Burnett, the organizer of the event and Dylan’s long-term collaborator said:

“Town Hall has been the location of many fateful moments, and I’m grateful for the invitation to celebrate one of those historic evenings on the 60th anniversary of Bob Dylan’s first concert there.

“He sang twenty four songs that night, all of which have been woven into the fabric of our culture. We are going to play a few of those songs, and we are also going to celebrate the sixty years of songs that have followed that night.”

While Frisell, one of the country’s premier jazz guitarists, who have collaborated with Burnett in the past and many other big names in the industry said:

“He’s one thing that just stayed consistent throughout whatever phases I’ve gone through, you know, with getting more into blues and then into jazz and into whatever I was into.

“I never stopped being into him the whole time.”

The guitarist was first introduced to Dylan’s early records in school by one of his English teachers that he described as “hippest English teacher that ever lived.” He listened to Dylan and recalled:

“He’s just constantly reinventing himself…that’s so inspiring for me. That’s what I’m trying to do.

“I mean, I could play the same songs every night, it’s not about that. But it’s about finding something new and unexpected every night, and trying to stay in that place where you’re not quite sure what’s going to happen next. And that’s where the real stuff happens and the way you keep growing. And for me, that’s what [Dylan]’s done his whole life.”

On the night of the event, a large photograph of Dylan was displayed behind the artists. The photo was taken on the evening of his 1963 Town Hall performance.