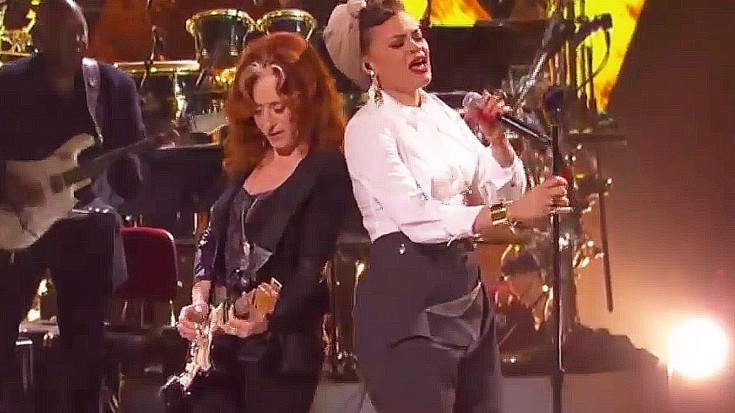 It’s always a great day when queen of the blues Bonnie Raitt takes the stage, and it’s even better when she does it with a song we’ve always loved! Last week saw Raitt perform on ABC’s brand new summer music series Greatest Hits where with the help of soul singer Andra Day, she dished out a fiery take on her own “Love Sneakin’ Up On You,” originally featured on 1994’s Longing In Their Hearts. Armed with her green Fender Stratocaster, Bonnie Raitt is absolutely unstoppable even as she’s sharing the limelight with Day; whether it’s trading vocal licks back and forth with the 31 year old singer songwriter or taking a step back to focus on slide guitar duties while Andra belts out a line or two, there’s no denying that this is a classic case of teacher meeting student as Bonnie delivers yet another performance for the ages, highlighted by an absolutely stellar guitar solo that kicks off at 1:56.

“There are things you dream about when you’re growing up and making music, and there are some things that you can’t even imagine.

For me, playing with Bonnie Raitt is one of those things. This is more than just a thrill, it is truly an honor.” – Andra Day

Coming hot on the heels of the duo’s performance of Day’s 2015 smash hit “Rise Up,” this performance of “Love Sneakin’ Up On You” is every bit as electrifying as it was the first time we heard it so many years ago, and we’re sure you’ll feel the same way. Be sure to check it out in the video below, as well as Bonnie and Andra’s take on “Rise Up”!