Billy Joel and Elton Team Up For An Incredible ‘Piano Man’ Duet, And It’s Too Perfect For Words! 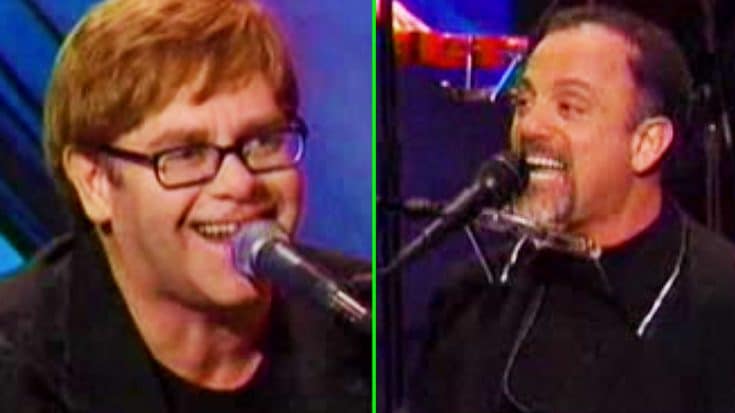 Billy Joel and Elton John are two of the greatest songwriters and musicians of all time. Although the two have held a rivalry throughout their careers, they have still remained friends, and when they hit the stage together, there really is nothing like it!

Elton joined Billy on stage back when they were both on The Tonight Show with Jay Leno. The two performed a duet of Billy’s ever so famous hit “Piano Man,” and brought the house down! The two trade off verses and sing the choruses together, and seamlessly sound perfect together! However, there is one slip up during the performance! During the final verse, which Elton sings, he blanks on the lyrics and just kind of ad-libs previous lyrics into the verse. Billy looks at him confused, and the two have a great laugh over the moment!

Fun Fact: This was inspired by Joel’s experiences playing at The Executive Room, a piano bar in Los Angeles. He worked there for six months in 1972 after his first solo album, Cold Spring Harbor, tanked. The characters in the song are based on real people Joel encountered while working at The Executive Room. The “waitress practicing politics” is Elizabeth Weber, who ended up becoming his first wife when Joel married her in 1973 (they divorced in 1982).

It’s great to see these two performing together, and we would love to see more of it!

Check out the amazing collaboration down below, and let us know what you think!