B.B. King Breaks A String Mid Jam, But The Way He Handles It Is LEGENDARY! 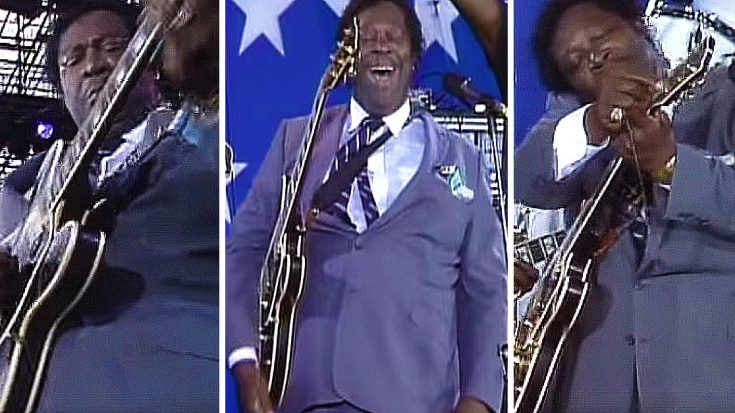 Guitar strings break, and sometimes they break while you’re smack dab in the middle of a really hot jam in front 80,000 people. It’s a fact of life faced by guitarists all over the world, but what do you do when disaster strikes in the middle of your big moment and you don’t have time to pass your axe to your guitar tech? If you’re late blues legend B.B. King, the answer is simple: you have a roadie bring you a new string, sing up a storm to keep the crowd busy, and you change your own damn guitar string and make it look like you meant to do that all along! That’s exactly what happened when B.B. hit the stage on a swampy Sunday in September of 1985 for the first annual Farm Aid concert in Champaign, Illinois; while performing “How Blue Can You Get” before a packed stadium of 80,000 fans, B.B. pops his top most guitar string but rather than passing his guitar off to a guitar tech to either be replaced or re-strung, B.B.’s professionalism and showmanship kicked in.

Fun Fact: As a child, B.B. was forbidden by his mother to sing the blues, which she called the Devil’s music.

As he had his guitar tech run him out a brand new string and stood there laughing to himself before immediately setting to work on re-stringing his guitar – all of this with the band still playing “How Blue Can You Get,” mind you – and singing up a storm to keep the crowd entertained while they watched in sheer amazement as B.B. re-strung his guitar, never skipping a beat. A year after his death, B.B. King is so very, very missed not just for his talent, but for the spirit of adventure he brought along with him to every gig. Young bands, take note – this is how a legend gets things done!