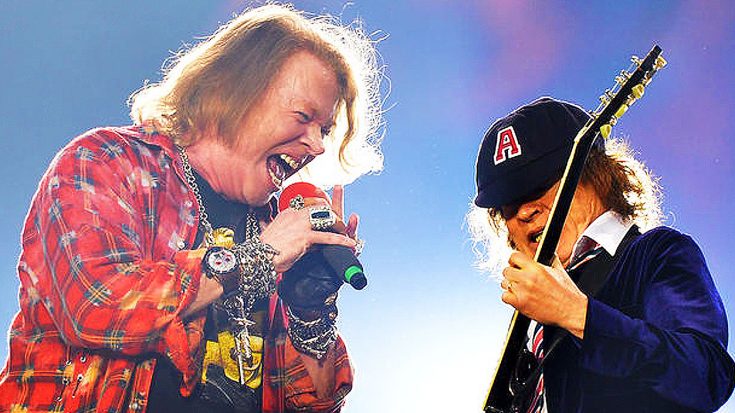 Although the future of AC/DC is very bleak and uncertain, guitarist Angus Young revealed some interesting insight on the band’s future. Many have talked about how AC/DC might not follow through with further legs of their current tour, but Young revealed that finishing the tour is not out of the question. If the band do decide to finish the tour, Young says that they are open to keeping Guns N Roses lead singer Axl Rose in the lineup. Young said that they were having fun with Axl in the band, saying that Axl broke out of his shell once he was able to walk after being confined to a chair due to a broken foot. Young even went on to compare Axle to past lead singers of the band.

“He’s more in the Bon style – the rock ‘n’ roll character, and he’s got his own folksy humor. He’s pretty quick with a quip. Axl has different vocal ranges. You can hear him one way in a Bon song. Then he can flip and do Brian, the higher register.”– Young explained.

Although many AC/DC members have been having issues with health and have contemplated retirement, it would be nice to see the band pull up their boot straps for one last run of shows. Axl seems to blending in nicely with the band, and really coming out of his shell. Young also explained how Axl had been working hard, doing his homework and making sure he was on his game. If they’re in a prime moment, why not keep it running for as long as possible?

What do you think? Should AC/DC call it quits, or bring Axl back for one last leg? Also, check out the video of AC/DC with Axl Rose down below.