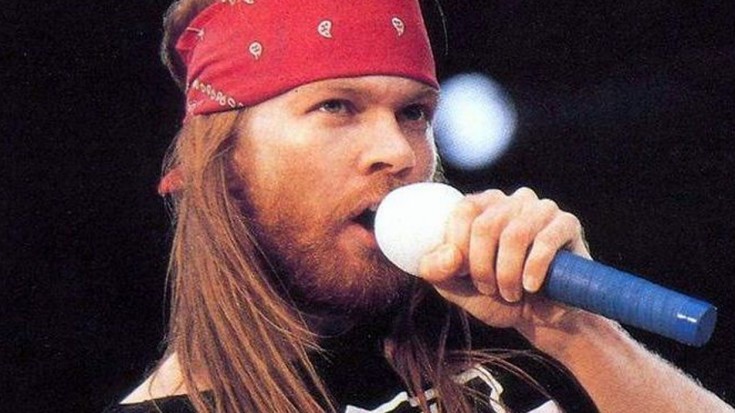 Axl Rose has had pretty long streak of good behavior lately. Showing up on time for shows, hanging out with fans before and after AC/DC shows on the band’s Rock Or Bust Tour, granting interviews and even appearing to enjoy them – it’s clear that Axl’s learned his lesson and he seems to be determined to not revert back to the tantrum throwing twenty-something we all remember, and his latest actions prove it.

As of this week, Axl isn’t signing stuff for a while. However, it’s not for the reasons (and with the reaction) you’re expecting; frustrated by a rash of “fans” only wanting his autograph to sell it on eBay, Axl was faced with the difficult decision to deny fans autographs for the time being, and rather than being the jerk we all remember him as, took to Twitter to quietly and respectfully announce his (hopefully) temporary decision:

Translation: “Can’t take the Ebayers, so unfortunately I won’t be signing things for a while. Much love to the real fans!”

While disappointing, most fans understand that unlike two decades ago, Axl’s decision isn’t coming from a place of superiority and not wanting to hang with fans because he’s too good for it – quite the contrary, actually. For the first time, Axl actually wants to be with fans and sign things and be the rockstar they always saw him as, and with his recent streak of awesome behavior, the decision to not sign autographs for fans definitely wasn’t a light one, especially knowing how a large section of society still feels about him. Here’s hoping that the sudden rash of eBay sales stops enough for fans to once again get the full experience of meeting Axl Rose and take home their own piece of rock and roll history!