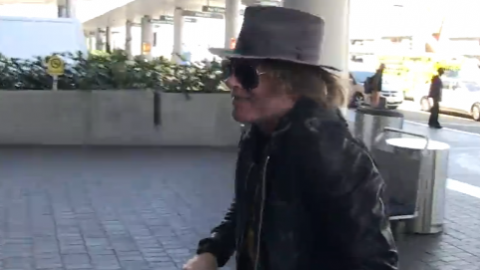 The Man Of The Hour

Ever since rumors have been circulating about the possibility of a Guns ‘n Roses reunion, Axl Rose has become a hot topic. Add in the fact that he had to borrow Dave Grohl’s giant light-up throne so he can continue performing even with a foot injury, it seems like no one’s stopping this guy from taking over the world once more. And when it became official that he’ll be AC/DC’s frontman for their upcoming shows and tours, we went nuts. True, he has so much on his plate right now. But man, all we can say is it’s about time.

When Axl arrived at the Los Angeles International Airport last April 25, a TMZ cameraman asked him what his favorite AC/DC hit was and guess what he answered? ‘Touch Too Much’. Starting May 7, he’ll be with AC/DC for their European stadium tour. After the last show in June 12, he’ll go back on the road with GnR for their summer reunion tour. Quite a busy man!