Axl Rose Closed The Show Only Axl Rose Can 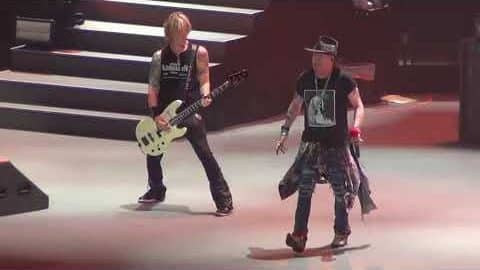 Axl Rose is many things, but he’s never boring. During their heyday, fans didn’t know what he would do – would he fight with another concert-goer or walk out? Just kidding, modern-day Axl is a pretty nice guy, which is probably why people continue to attend their sold-out shows.

On October 23, 2017, GnR played at XL Center, Hartford, CT, USA. Towards the end of their set, he sped up because he wanted to go home sooner. Ah well, that’s classic Axl for you. Watch the video below so you’ll know what we mean.

Earlier this month, the band concluded their We’re F’N Back tour at the Seminole Hard Rock Hotel & Casino in Hollywood, FL. It was so successful that Axl took to social media to thank fans.

“Again huge thanks to everyone who came out to the shows,” he tweeted. “A special thanks for everyone for working with us to protect your safety, the safety of each other, the safety of our crew and the venue’s crews following our COVID protocol.”

“These are stressful times (which is an understatement),” he added, “and your cooperation and participation is greatly appreciated and not taken for granted.”