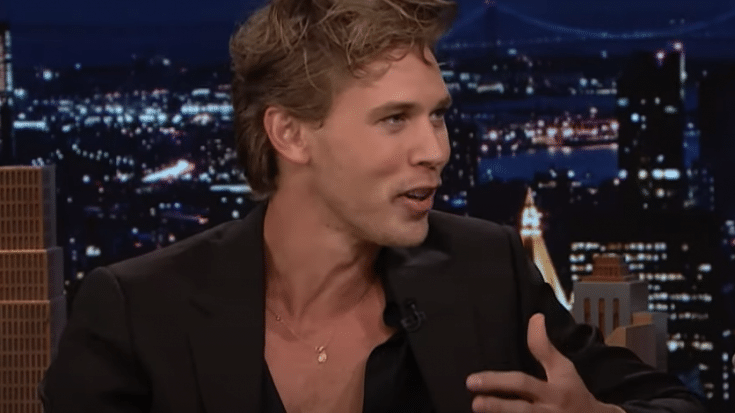 Austin Butler talked about his different impressions of Elvis Presley in the upcoming biopic Elvis and even showed it off on his recent appearance on The Tonight Show Starring Jimmy Fallon.

When asked if he got nervous auditioning for the role of Elvis, he said:

“Yeah, it’s terrifying. I mean, but it’s that thing where it’s… I mean, it’s the biggest responsibility I’ve ever felt.

“You feel such a responsibility to him, to his family, to all the people around the world who love him so much. And so it’s terrifying.”

And when Butler finally got the part he said he felt, “like you’re about to climb Mount Everest.” Fallon applauded him for doing the different accents of Elvis that changed through time and how he sang in the film and didn’t just lip sync.

When asked how he did all the voice changes, he said:

“For one thing, you listen to Elvis speak and there’s these amazing archives out there of every interview he ever gave. And that was the first thing that hit me was, it’s not just one voice of Elvis. His voice changed so much over the years.”

Then Fallon asked him to give an example and Butler amazingly did Elvis voice from three different years. When Butler was cast three years ago, he immediately started extensive voice training, learning Presley’s speaking and singing voice.

He was chosen against other actors who auditioned for the role such as Ansel Elgort, Miles Teller, Aaron Taylor-Johnson and Harry Styles. Elvis will hit the theaters on June 24 in North America and internationally on June 22. Watch the full interview below.