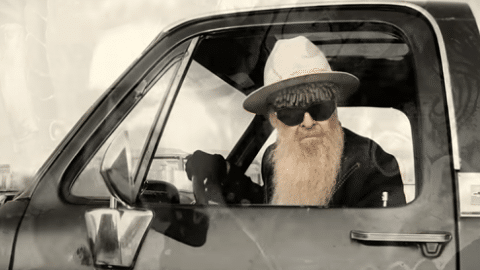 ZZ Top’s Billy Gibbons just dropped a new music video for the song “My Lucky Card” featured on his upcoming album titled “Hardware”, slated for release on June 4 via Concord. It’s his third solo studio effort – a follow-up to 2018’s “The Big Bad Blues”. The clip was filmed at Pappy & Harriet’s legendary honky-tonk Pioneertown Palace in Pioneertown, California. This place was originally built for a western film.

It was shot in just one take. They had no crew and only made use of the available light.

He explained in a statement, “We thought Pappy’s would be a great place for us to do the video since it reflects the rough and tumble high desert vibe that was the inspiration for the album.”

“I play a slide guitar in this one but neglected to bring a proper slide along for the shoot. “Necessity being a mother, we improvised and used a beer bottle,” Gibbons continued. “We went through a case or more looking for just the right bottle neck and, at last, found one on a classic Mexican brew. That was some thirst-quenching research to be sure.”