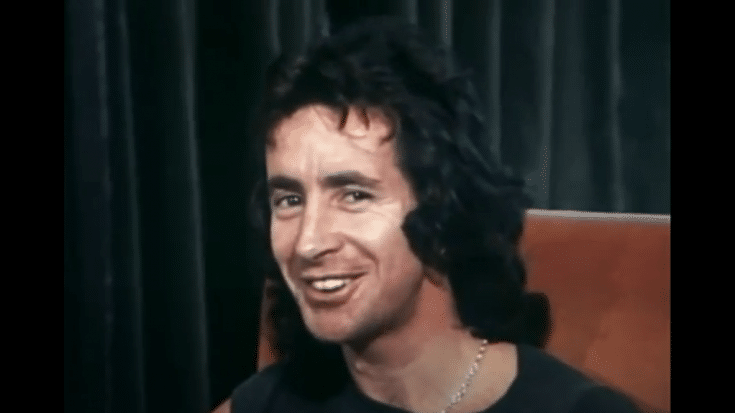 Angus Said That Bon “Never Really Got The Chance”

In a new interview with Paste magazine, AC/DC’s Angus Young finally set the record straight about rumors on the band’s magnum opus Back in Black – that their late frontman Bon Scott performed some of the songs on their iconic LP before he tragically passed away.

Angus denied it because Scott “never really got the chance”. According to AC/DC’s resident axeman, him and his brother Malcolm wrote the songs for Back in Black in a rehearsal room in London and what usually happened was that the pair would get a drum kit and “Malcolm would get behind the drums sometimes, and I’d get on the guitar and just tap out a riff.” Then there were times when they would trade places – Malcolm on guitar and Angus knocking out “a simple beat on the drums”.

They were working on an intro which eventually became “Hells Bells” when Bon Scott showed up. And since Bon was originally a drummer, Malcolm turned to him and said, “Oh, great, Bon! You can get behind the kit!”

Angus recalled, “So Bon got behind the drum kit so we could try and work out this intro, how we wanted to do it. So we sorted that out how we wanted, and the other one was “Have a Drink on Me,” a riff Malcolm was playing around with.” Bon worked on the demo version but Angus shared that “that was it, really.” He added, “If you were looking up what Bon had done, it was really just to help us with those demos on the drums.”

Since Bon’s been writing lyrics, they scheduled to meet up the following week but it never happened since Bon died. After the tragic event, Malcolm and Angus considered quitting the band altogether but their loved ones, including Bon’s parents, urged them to continue. A few weeks later, they got Brian Johnson as replacement.