Album Review: “The Lamb Lies Down On Broadway” By Genesis 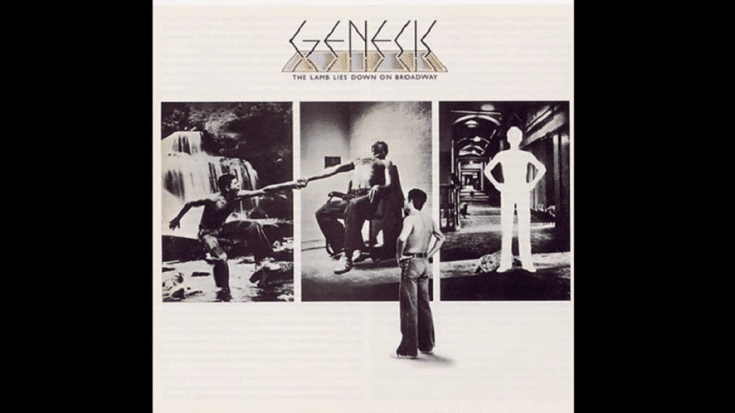 A Crowning Achievement For The Band

A full-fledged concept album, Genesis pulled out all the stops for their sixth studio LP “The Lamb Lies Down on Broadway.” It’s massive, elaborate, and ambitious. However, it was the final Genesis record that featured frontman Peter Gabriel. This LP serves as the swansong of the band’s classic lineup of Gabriel, Tony Banks, Phil Collins, Mike Rutherford and Steve Hackett and they would never churn out anything of this caliber ever again.

“The Lamb Lies Down on Broadway” is the culmination of their artistic vision. It’s mysterious and somewhat strange but it’s enthralling all the same. There’s rock, there’s jazz, and of course, there’s Gabriel’s penchant for theatre. The story follows a Puerto Rican named Rael who experiences a series of bizarre events and meets various people along the way.

The sessions were particularly stressful to Gabriel who insisted that he be the one to write the lyrics but he wasn’t always present because he had to commute back and forth since his wife Jill had troubles with her pregnancy and it continued even after the birth of their daughter, Anna-Marie.

“The Lamb Lies Down On Broadway” has its fair share of flaws and at times, it feels like it’s all over the place. But the songwriting and execution are absolutely glorious. Every single member of Genesis shined and the songs may be varied and diverse but there are plenty of gems to be found here – from jazz numbers to raunchy rockers.

Highlights are Carpet Crawlers, The Lamb Lies Down on Broadway, and In The Cage.

A hauntingly beautiful track, this part is where Rael finds himself in a “red ochre corridor” and around him, people are crawling towards “a heavy wooden door.” It’s both magical and powerful.

The Lamb Lies Down on Broadway

This one’s on the pop-rock side and like the other songs on the LP, it’s hypnotic. It does demand the full attention of the listener.

One of the two songs on the LP clocking in at over eight minutes, it may be long but it’s far from boring.

“The Lamb Lies Down On Broadway” is a great way of wrapping up the Peter Gabriel era.