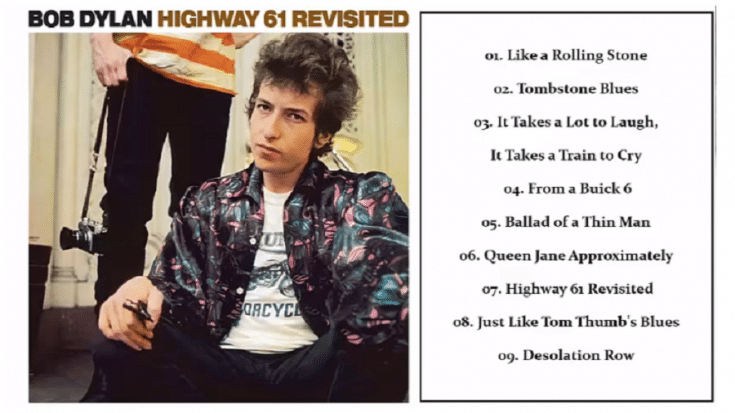 Bob Dylan is the kind of musician who’s naturally rebellious and who strays away from whatever people tell him to do. He breaks away from what is deemed conventional, formulaic, and safe. And 1965 saw him break out of his shell and become a full-fledged rockstar. He went half electric and half acoustic with Bringing It All Back Home but for Highway 61 Revisited, he pulled out all the stops.

It’s a searing, menacing, and heavy-hitting album that showcased Dylan at his most uninhibited and uncompromising. It was revolutionary and ground-breaking. He blurred the lines between folk and rock and gave his audience the best of both worlds. Musically, he revitalized his sound and upped the ante by hiring a rock ‘n roll band with enough passion and energy to add more power to the songs. They helped Dylan transform his musical vision into a reality. Lyrically, Dylan proved he could more than hold his own against the greatest songwriters. He explored various themes and proved himself worthy of being called a poetic genius.

Highway 61 Revisited is bookended by two of his most popular and enduring tracks. Even the sequence is perfect – with the lighter material placed cleverly in between harder and heavier songs to allow some sort of breather for the listener.

Like a Rolling Stone isn’t just his most acclaimed song but also one that transformed him from a folk icon to a rockstar. Filled with open directness and youthful cynicism, Al Kooper’s organ improv did much in the way of elevating Like A Rolling Stone to the next level. Tombstone Blues is a surging and explosive blues rock number with stellar guitar work. It Takes a Lot to Laugh, It Takes a Train to Cry is a slow blues ballad with an unexpected star – the harmonica. From A Buick 6 may be on the weaker side but it’s still impeccable for all that. It’s not as wild or punchy as the others but it only proves that there’s no bad song on this album. Ballad of a Thin Man follows the story and demise of a certain Mr. Jones. It takes on a gloomy mood but the storytelling is simply superb.

With Queen Jane Approximately, Dylan criticizes the song’s subject but it doesn’t seem that scathing especially with the lighter overall vibe. The title track references Abraham’s story in the bible which somehow contrasts with Dylan’s almost-funny use of a slide whistle several times in the song. Just Like Tom Thumb’s Blues is about someone wandering around Juarez, Mexico where he encounters drugs, alcohol, and authorities not doing their job. The LP then wraps up with the 11-minute acoustic ballad Desolation Row. It basically reinforces Dylan’s penchant for writing lyrics that hold your attention until the very end no matter how lengthy the song is. He dabbles with fiction, history, and even Bible characters.

All in all, Highway 61 Revisited was truly ahead of its time. It became a benchmark for several albums that followed. There’s no filler to be found and it’s brilliant from start to finish.