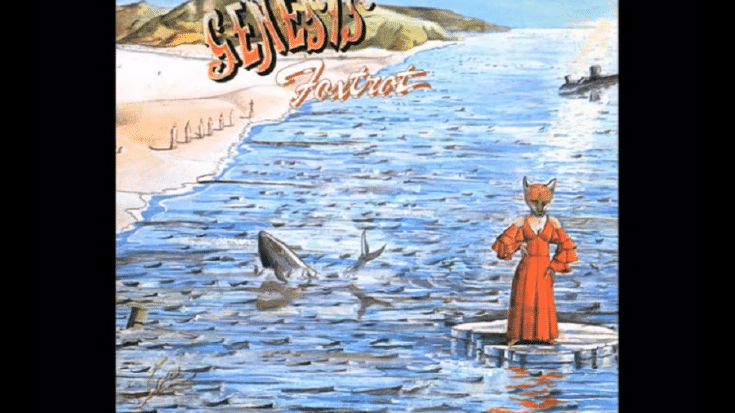 At The Peak of Their Powers

It wasn’t until their fourth album that Genesis finally came into their own. Nursery Cryme was by no means their apotheosis but it was fundamental to the band’s growth and it served as their jumping-off point. Less than a year later, they released Foxtrot – the first in a trilogy of LPs that sealed the deal for them and one that made them stand out among their contemporaries.

Foxtrot is cohesive and consistent and it was delivered with raw energy that often leaves the listener breathless but wanting for more. Genesis obviously didn’t take themselves too seriously as evidenced by the humor found in their lyrics and themes. But the arrangements and passages are complex enough to warrant awe. There’s not one filler to be found and even with a 23-minute epic, it doesn’t overshadow any of the other tracks.

Foxtrot is heavy but beautiful. The songs have their own charms individually but as a whole, it’s spectacular.

It opens with Watcher of the Skies. From the dark and moody introduction to the impressive guitar work and unusual time signatures – it’s an ambitious track but powerful and majestic all the same. Time Table is an emotional piece. It’s soft and melodic but still packs a lot of punch. It also offers a quick respite after being overwhelmed by Watcher of the Skies.  The album then picks up with Get ‘Em Out by Friday which is colorful and dramatic. The vocal performance sounds fascinating and all in all, the track is peppered with the band’s brilliance. In Can-Utility and the Coastliners, everyone gets to have their own shining moment. It starts off slow before morphing into a jam delivered with visceral power. With the time changes and movements, it’s sometimes hard to believe this is less than six minutes long.

Horizons is a short instrumental and more of an intro to the closing track. Steve Hackett displays his virtuosity with his masterful playing. And then comes what we can only describe as a mind-blowing magnum opus. It’s the 23-minute suite Supper’s Ready. It’s a crowning achievement not just in their catalog but in prog-rock. Changing time signature in dizzying speeds and yet maintaining it’s cohesiveness, there’s no dull moment here. Supper’s Ready pulls you in and consumes you. And only spits you back out into the real world when it’s over.

Foxtrot is bookended by two stunning numbers that proved Genesis were well on their way to achieving legendary status. It’s almost fifty minutes long but not a minute of boring music. It’s an essential album not just to Genesis fans but for those who love prog-rock.