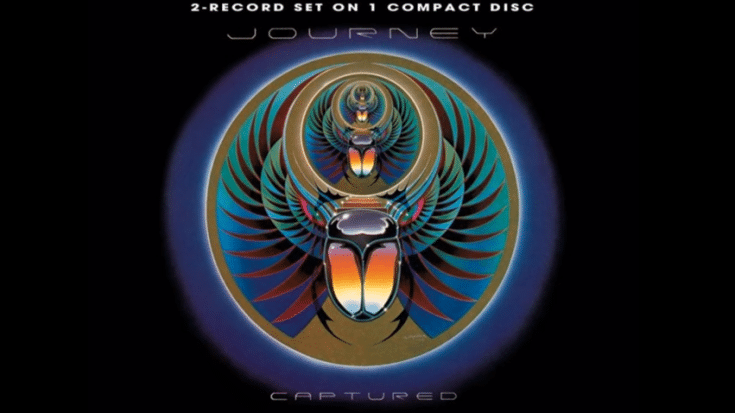 Live albums can be tricky. If done right, it could capture the magic and energy of the live performances but if done poorly, it could easily be one of the more forgettable LPs that even the most ardent fans wouldn’t bother to listen to a second time. And Journey’s “Captured” falls somewhere in between. Even Steve Perry himself isn’t too fond of the LP.

It would still be a few months away before they will release “Escape” which spawned the classic hits “Open Arms,” “Don’t Stop Believin'”, and “Who’s Cryin’ Now.” “Separate Ways” and “Faithfully” were not yet conceived. Even so, at this point, Journey already had a string of hits. And that’s what they used for “Captured” – a live double-disc which was recorded during their 1980 “Departure” Tour. It’s the last LP that featured keyboard player and founder Gregg Rolie.

It peaked at #9 on the US Billboard 200 and was eventually certified 2x platinum by the RIAA. But both fans and critics can agree – it wasn’t their finest musical moment.

“Captured” is interesting and entertaining enough – it perfectly showed where Journey was at that point in their career. Their biggest hits would come later and as far as live albums go, this isn’t all that bad. But it’s far from being unforgettable either. The delivery and execution of the songs were good, as to be expected with a tight group like Journey. Steve Perry also shined with his vocals.

But there’s something lacking that’s hard to pinpoint. The energy is there but it’s too perfect – almost like you’re listening to a studio recording instead of a live performance. And perhaps it’s that perfectionism that takes away the magic that should be present here. Again, their solid playing is impressive but not exactly something that left us in awe.